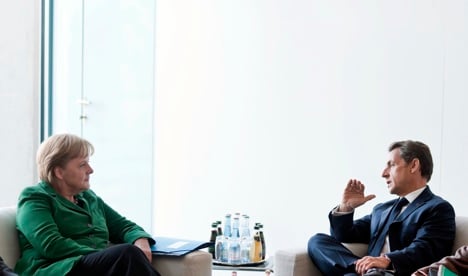 Speaking at a joint news conference with French President Nicolas Sarkozy in the German capital, Merkel said Germany and France had “decided to do what is necessary to recapitalise (the) banks in order to assure the granting of credit to the economy.”

Without announcing concrete details, Sarkozy said that Europe must “have resolved its problems” by the time G20 leaders meet in the French Riviera resort of Cannes at the beginning of November.

As Europe’s debt crisis simmers and Greece teeters on the brink of bankruptcy, Sarkozy vowed a “global, lasting and quick response” to the crisis before the end of the month, adding this had been the “main result of this Franco-German meeting.”

Sarkozy added that “agreement was complete,” following reports that Europe’s two biggest economies were at odds over how to proceed on shoring up banks overexposed to risky sovereign debt.

“An economy is not prosperous without stable and reliable banks,” he said.

Sarkozy also said that Paris and Berlin would propose “important changes” to European treaties, adding he favoured greater integration of the eurozone.

For her part, Merkel said the “goal is to have closer and more binding cooperation of eurozone countries” to avoid overspending.

Leaders want to prevent any new, bigger reduction of Greece’s debt triggering a banking crisis reminiscent of 2008 which set off a global recession.

In July, leaders agreed a 21-percent “haircut”, or reduction in the value of the debt banks hold, in exchange for lowering Athens’ debilitating repayments in the next few years.

Berlin and Paris reportedly differed over how to go about recapitalising Europe’s banks, which the IMF thinks will need between €100 billion and €200 billion ($135 billion and $270 billion) to cover potential losses.

France, fearful of losing its top-notch AAA credit rating, would rather dip into European funds than its own coffers.