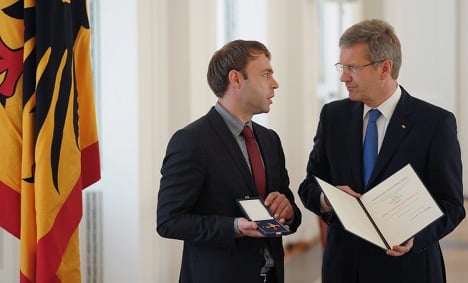 Marcel Gleffe, 32, was on holiday near the island of Utoeya in July when he heard what he initially thought was fireworks on the island – but quickly realised was gunfire.

Anders Behring Breivik had already set off a bomb in nearby Oslo and was walking around the island shooting the participants of a youth camp. A total of 77 people were killed and dozens more injured.

When Gleffe went to the water he could see desperate children trying to swim to safety and jumped into a boat to help them get away. He managed to get around six people in his boat at a time and made several trips, rescuing around 30 people in total.

German President Christian Wulff awarded him the Order of Merit on Tuesday – along with 35 others including scientists, musicians and actors.

Wulff called Gleffe’s exploits “comforting and encouraging,” despite the tragedy.