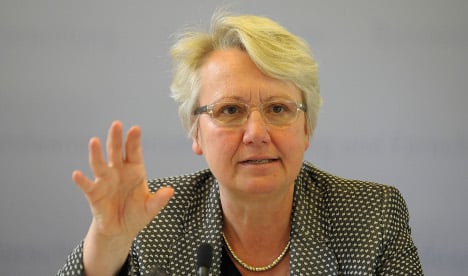 Schavan visited the pope at the end of March, flying to Rome to see him about six months before his state visit to Germany. The conservative Christian Democrat Union politician was in the line of ministers who greeted Benedict when he arrived in Berlin on September 22.

Her trip with three advisors involved a general audience and a short private conversation, after which the minister reported that he was looking forward to his trip to Germany.

And although there were several commercial connections between Berlin and Rome, Schavan used a Bundeswehr jet, at a cost of around €150,000, the magazine reported on Saturday – she said she could not have fitted everything in otherwise.

Guidelines say that ministers should only resort to such measures, “when the journey cannot be undertaken by using public transport or cars, or if other crucial official business cannot be conducted without using the airforce’s airplanes.”

Schavan said that she could not have made it to a reception of the German ambassador on the evening before her meeting with the pope if she had taken a commercial flight. She had been taking part in the Islam conference in Berlin that afternoon until at least 3 p.m.

Her spokesman said her return journey by military jet was also necessary because she had to deliver a speech to the expert forum on education in the economy in Nordhorn, Lower Saxony, as soon as she arrived back in Germany.