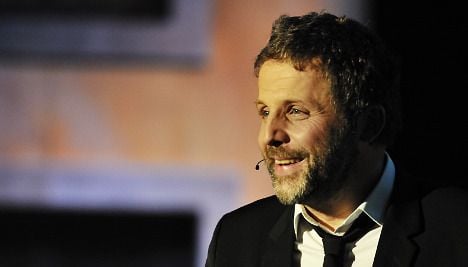 According to weekly magazine Gala, the satirist declared shortly before he wed Muriel Cousin in the town hall of Ville d’Avray, west of Paris, that he could not get married in front of Nicolas Sarkozy.

He then took matters into his own hands by covering the portrait with a photo of François Hollande, the man who is currently leading opinion polls as the most likely Socialist challenger to the president in next year’s elections.

In France, civil wedding ceremonies take place in town halls where there is always an official portrait of the incumbent head of state.

Le Figaro reported that his change of president did not last long after officials removed the photo.

“It was an act that I completely denounce and which earned him a firm rebuke from the official in charge of the ceremony,” said the town’s mayor, Denis Badré, reported Le Figaro.

“I can assure you that the photograph of Nicolas Sarkozy was present at the moment the marriage was celebrated. The humourist wanted to get some coverage for himself by undermining a republican practice.”

Le Figaro also reported an interior ministry clarification that the presence of the portrait is a French tradition.

“The marriage cannot be invalidated as a result of the withdrawal of the official photograph of the president from a town hall, but it is contrary to the founding principles of the Republic,” it said.

47-year-old Guillon is well known to TV viewers and radio listeners for his satirical attacks on politicians across the political spectrum.

He made the headlines in 2010 after he was suddenly sacked from his job on the breakfast programme of radio station France Inter. The firing was judged to be unfair by an employment tribunal and the station was ordered to pay damages.