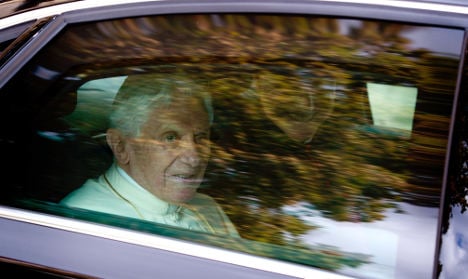 While Muslim leaders were pleased with his inclusive comments, he left some Protestants disappointed he did not make more of an ecumenical gesture.

“We believers have a special contribution to make towards building a better world,” he said during the meeting with Muslim leaders.

“If our actions are to be effective, we need to grow in dialogue and mutual esteem,” added the pontiff, 84.

Christian and Muslims had many things that bind them, which can act as an example to society, Benedict said.

“I am thinking, for example, of the protection of the family based on marriage, respect for life in every phase of its natural course or the promotion of greater social justice,” he said.

The head of the Central Council of Muslims in Germany, Aiman Mazyek, welcomed the pope’s comments, saying there was a “big chance that Muslim-Christian dialogue would continue to gather pace” after his remarks.

On his previous trip to Germany, in 2006, Benedict offended the Muslim community by appearing to link Islam with violence in a speech at Regensburg University.

Benedict headed for Erfurt in the afternoon, where he met leaders of the Evangelical Church in Germany (EKD), but disappointed those who had hoped for a signal of reconciliation between the Catholic and Protestant Churches.

Speaking at the Augustine Monastery where Luther had lived 500 years ago, he said, “Prior to the pope’s visit there was some talk of an ‘ecumenical gift’ which was expected from this visit.

“There is no need for me to specify the gifts mentioned in this context. Here I would only say that this reflects a political misreading of faith and of ecumenism.”

But his very presence at the monastery was greeted as an important gesture, as was his positive reference to Luther.

“The question of what God is to me, and what I am to God, this burning question of Martin Luther must become our question in a new form,” said Benedict.

But he did not take part in a joint Catholic and Protestant Eucharist, remaining firm in the separation of the two churches. “The belief of Christians is not based on an assessment of our advantages and disadvantages. A self-made belief is worthless. Belief is not something that we can think of and do deals with,” he said.

The pope had said he was not prioritising the idea of bringing the two churches closer together, leaving many disappointed.

Nikolaus Schneider, chairman of the EKD council, said he would like to see more effort made on behalf of couples from different confessions. “The real-life situation of people must drive these questions,” he said.

On Friday evening organisers of vespers with the pope in a field in Eichsfeld, near a chapel known as a place of pilgrimage, said that 90,000 were gathering – significantly more than the 60,000 initially expected.

Benedict has a series of engagements across Thurigia and Baden-Württemberg on Saturday, and will spend most of Sunday in Freiburg before returning to Rome.