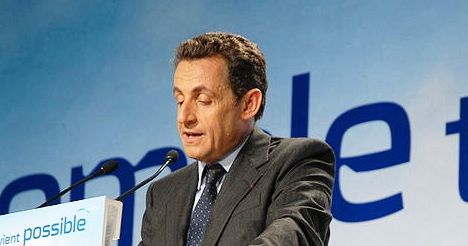 This week two of Sarkozy’s closest associates, including the best man at his 2008 wedding, were arrested and charged by police investigating alleged kickbacks on an arms deal and illegal campaign finance contributions.

The money was allegedly kicked back to former prime minister Edouard Balladur’s failed 1995 presidential campaign by middlemen in a contract to supply French submarines to Pakistan.

Sarkozy was the campaign’s spokesman at the time of the alleged payments, but angrily insists he had nothing to do with funding. Government stalwarts leapt to his defence, but the response has been muddled.

“It’s a plot against the president of the republic,” declared centre-right lawmaker Axel Poniatowski, following the lead of many of Sarkozy’s followers in painting the allegations as a political conspiracy.

But the sudden advance in the long-running investigation appears to have more to do with the royal marital troubles of one of Sarkozy’s allies, his 60-year-old former communications adviser Thierry Gaubert.

Gaubert is married to Princess Helene of Yugoslavia but separated from her and she has reportedly told investigators that her husband often travelled to Switzerland with an arms dealer to pick up suitcases full of cash.

Gaubert was charged on Wednesday, but not before Sarkozy’s political adviser and former interior minister Brice Hortefeux called him to warn him.

“She’s giving up a lot, apparently, Helene,” Hortefeux told his friend, according to a transcript of the call, which was intercepted by investigators and leaked to the press, including AFP.

“What news have you got on that? She doesn’t tell me anything,” Gaubert replied. “I don’t want to discuss this on the phone,” Hortefeux warns, adding: “There’s a lot, though, eh?”

“She was interviewed. She knows. She was aware of your activities. Listen, uh, try to swing by one of these days anyway,” Hortefeux replied. Gaubert has been released but has been charged and is under investigation.

Several of Sarkozy’s opponents said the leaked call was evidence that Hortefeux, who is slated to run Sarkozy’s re-election campaign, had access to the records of a supposedly independent investigation.

Hortefeux denied this, insisting he was referring to “journalistic rumours” that Princess Helene was cooperating with the probe, but Sarkozy’s own office had already brought suspicion on itself.

In a terse statement on Thursday, the Elysee Palace declared that Sarkozy had had no role in financing Balladur’s campaign.

It went on to say: “As far as the so-called ‘Karachi affair’ is concerned, the head of state’s name does not appear in any part of the dossier. His name has been cited by no witness nor actor in this case.”

Some questioned this assertion: Sarkozy’s signature as budget minister at the time does reportedly appear on documents setting up a front company to handle commissions on the submarine deal.

But beyond that, how does he know his name has not come up?

In theory, the probe is led by an investigating magistrate, and the Elysee ought not to know what had been discovered until it is complete. Magistrates and Sarkozy’s opponents were quick to denounce the apparent admission.

“Such a slip is genuinely surreal from the presidency of a democracy. Could the Elysee have had access to case files in an ongoing investigation, like in a banana republic?” demanded conservative lawmaker Nicolas Dupont-Aignan.

France will go to the polls in April for the first round of a two round presidential election. With seven months to go, opinion polls show Sarkozy is likely to lose to the victor of the ongoing Socialist primary.