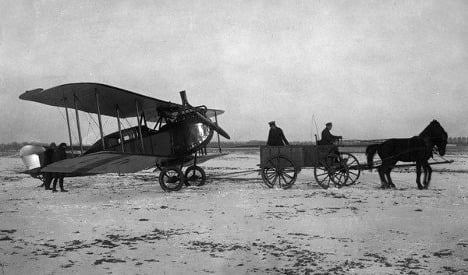 Holy Mass with the Pope

Why should the Bavarians have all the fun? Berlin celebrates Oktoberfest too you know. Gather beneath the blue and white lozenges at Berlin’s Central Festival grounds and raise a glass of wheaty goodness like a true Bavarian.

Typography, painting, photography, graphic-design and installations converge in a new group show at Neonchocolate Gallery. Join the art and design collective 44flavours at Saturday night’s opening and fete the work of 14 international artists.

She was The Guardian’s “New Band of the Day” in April, and Rolling Stone’s “Artist to Watch” in May. EMA (aka Erika M. Anderson) has been on a roll all summer. Move your body to the South Dakota native’s grungy country-goth rock Saturday at Gebäude 9.

Frankfurt’s Städelschule has nourished the talents of young artists from around the world since 1817. See what this year’s batch of graduates has to show for themselves at the graduate exhibition opening Tuesday evening.

New in town? Head to the Römer (Frankfurt’s City Hall) on Sunday where you’ll learn about everything a newbie would ever want to know like where to open a bank account, where to take German classes, and where the local AA meetings are held. Groups, clubs, camps, schools, and churches of all stripes will try to get you to join their ranks while apple juice flows and live music fills the air.

With Hamburg’s harbour getting all the attention lately, it’s nice to hear its airport is getting a little love too. A big party takes place this weekend in honour of the airport’s 100th birthday. Over 40 planes will be on display including the historic Super Constellation from the 1950s. Help the grand old dame celebrate a century.

Hamburg Airport may be 100-years-old, but if John Cage was still alive the legendary composer would be 99. A milestone like this calls for a three-day interdisciplinary festival, which is exactly what Kampnagel and the NDR Symphony Orchestra had in mind. The performances start Thursday with Hungarian choreographer Eszter Salamon’s “Dance for Nothing,” a solo piece incorporating Cage’s “Lecture on Nothing.”

Hiroshi Kawano – The Philosopher at the Computer

In the early 1960s, Hiroshi Kawano created his first published computer artworks on his OKITAC 5090A, setting in motion an extensive exploration of the philosophy of making art through digital means. See the pioneer’s straight lines and primary hued pixels at ZKM in Karlsruhe, where a retrospective of his works opens on Friday.

From the Austrian Empress Sissi’s poems to hip hop and funk from the Caribbean, this year’s Ander Art festival features an assortment of stylistic enterprises. Head to Odeonsplatz Saturday for your fill of aural delights from around the world.

Birth of the Cool Revisited – A Tribute to Miles Davis

It’s been 20 years since legendary jazzman Miles Davis passed away. In his honour, French saxophonist Matthieu Bordenave put together a nonet that includes German trumpet player Axel Schlosser, American saxophonist Roger Jannotta, and Australian guitarist Peter O’Mara. On Wednesday, the guys play their version of The Birth of the Cool. Sidle up to the stage at the studios of Bavarian Radio, or tune in at home.