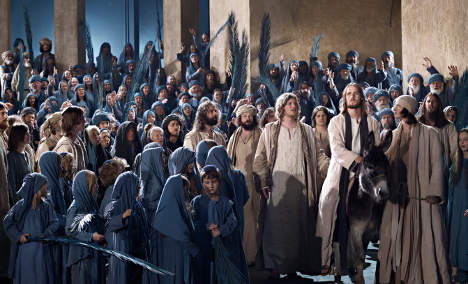 About a dozen of the children who live in the Marie Mattfeld House in Bavaria – because their own families are not in a condition to care for them – took part in last year’s Passion Play.

The play is an internationally-famous production depicting the life and death of Jesus, performed from May until October by almost the entire population of the village of Oberammergau – where the children’s home is located – every ten years.

The town has performed it since 1634, after the plague and the 30 years war had ravaged the region – a pledge was made to do so every decade as a sign of piety, and possibly to protect the village.

It is now celebrated as a traditional event which ties the villagers together and celebrates Christianity and community.

Yet when those working with the children from the home discovered that 75 percent of the money paid to them for their work was being seized by the city, they felt it was less than fair, according to a report in the Münchner Merkur. Each was paid a three-figure sum, the paper said.

Legally, the city of Munich, which is one of the bodies paying for the home’s upkeep, has the right to take 75 percent of any income the children living there have, as a contribution to the costs. The Münchner Merkur reported on Tuesday that it was normal practice for even money earned doing paper rounds to be docked in this way.

Kurt Meier is chairman of the organisation Friends of Mattfeld House, which donates €30,000 a year to the home, in which 27 children and young people live. He said he was outraged by the latest ‘contribution’ demanded of the children.

“We are looking after children who don’t have anybody, and who nobody cares for apart from us,” he told the Münchner Merkur.

“The full Passion Play payment would have been a nice chunk of pocket money for them, with which they could have afforded something for themselves, even if not much. The behaviour of the city is impossible and abysmal.”

But a spokesman for Mayor Christian Ude said the city had no option – the law demanded that the children give up all but 25 percent of their income.

A number of Munich city politicians have appealed to Ude for him to find a way for the children to get their money, to no avail.

Christian Stückl, principle director of the Passion Play, even got involved, speaking with Ude to plea for a exception to be made.

“Surely a precedent will be set somewhere, but if it is somehow possible, the children should get the money that is theirs, paid in full – even if they only get it paid into a savings account. Otherwise you remove any motivation for them to earn anything in the future.”

“That the city is inflexible on this is really disappointing,” said Florian Streibl, a local politician who has been trying to get the money paid to the children. “The children were integrated in the Passion Play, they experienced recognition in the village and provided a service for the community. They earned their full payment.”

Yet although Maria Kurz-Adam, head of the city’s Youth Welfare Office, said she could understand the dismay, there was nothing she could do to change things.

“Of course such an involvement of the young people is very important. But we are dealing with a federal law here, and we have to keep to it.”

She said there was no way to make an exception as it was not fair to differentiate between money earned in the Passion Play or by delivering newspapers.

“Mind you,” she said, “The city of Munich spends €4,000 a month for each place at the Marie Mattfeld House in Oberammergau.”