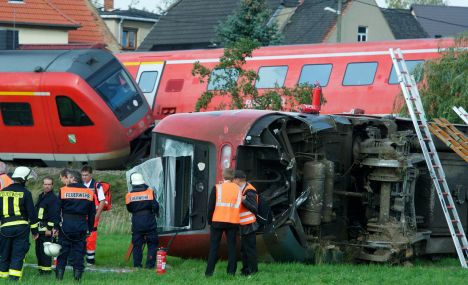 Three of the regional train’s four carriages came off the tracks, one of them ending up in a nearby meadow.

There were around 70 passengers on the train, which crashed near Bad Lausick between Chemnitz and Leipzig just after 1 pm, a spokesman for Deutsche Bahn rail service said.

“Nobody was in the car, otherwise there would have been fatalities,” said police spokesman Torsten Henkel.

Police said the car was shunted onto the tracks by a van as it waited at a railroad crossing. The car’s driver had managed to leave the vehicle just before the impact.

“I opened my door, I unfastened my safety belt and I sped off,” driver Horst Fiedler told television.

“We tried to get the car off the rail tracks but it didn’t work. We wanted to push it over but the train approached too fast,” said Manfred Kiefer, who was at the scene at the time of the accident.

It is the third train accident on the stretch of track since 2009.