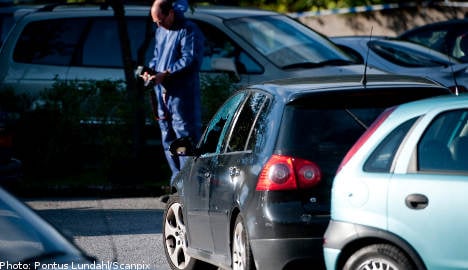 ”We are pretty sure that the perpetrator meant to target him, that it was not an accident,” Karin Solberg, press spokesperson for the South Stockholm Police told The Local.

The dead body was discovered by a passer-by who alerted the police just before 7am on Tuesday morning. The man saw a car with a smashed-in window and a lifeless body behind the wheel.

”He didn’t want to get too close but kept his distance,” said police inspector Sven-Erik Olsson to daily Aftonbladet.

When police arrived on the scene they quickly established that the man was dead and that he most likely had died from a gunshot which had shattered the side window.

The victim was subsequently identified by the police.

He is a 37-year-old Stockholm resident and so far the police have not been able to find connections to any criminal activities that could have brought on his murder.

”At the moment we are busy trying to get an idea of his past, pinpointing any connections, persons or motives that may have played a part in his killing,” said Solberg.

According to Solberg, police have received a number of tip-offs and are presently busy questioning witnesses resident in the area.

Apart from the statement from the man who discovered the crashed vehicle, police have questioned locals who say that they’ve heard a series of loud bangs earlier in the morning.

Despite not being able to disclose anything further at the present stage in the investigation, Solberg confirmed that the police are working from several theories.