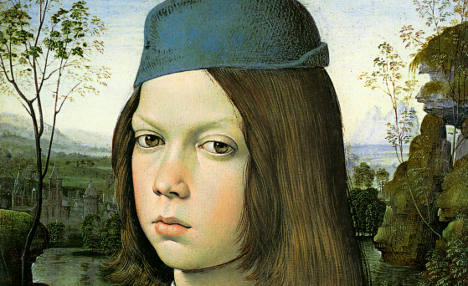 Andrea d’Assisi's Portrait of a Boy, from the Gemäldegalerie Dresden.

Introduce the little ones to the magical world of the opera this weekend. Berlin’s Comic Opera opens the season with a family festival complete with demonstrations by make-up artists, costume designers, and set designers, as well as performances by choirs, and orchestras. The highlight is a staging of the new “insect opera” “Mikropolis.”

Faces of the Renaissance

Portraiture masterpieces by Botticelli, Lippi, da Vinci, and other superstars of the Renaissance art world hang at Berlin’s Bode Museum in a new exhibition organized by the Gemäldegalerie and the New York Metropolitan Museum of Art. With more than 150 works on loan from places like the Louvre and the Uffizi, “Faces of the Renaissance” recreates 14th to 17th century Italy complete with Venetian noblemen, Florentine merchants, and mysterious beauties.

When Gustav Mahler composed his eighth symphony in 1906, he called it “the grandest thing I have done yet.” With a full orchestra, two choirs, a children’s choir, and eight soloists, it’s safe to say Mahler’s Symphony No. 8 is indeed quite grand. See the Berlin Philharmonic Orchestra perform the piece this weekend along with works by Antonio Lotti and Thomas Tallis during Musikfest Berlin, a 19-day festival of grand concert music.

Few performers burrow into the hearts and souls of an audience the way Baby Dee does. Once the music director at a Bronx church, and a Coney Island circus side show act, the singer is transfixing her fans across Europe this fall. Head to Stadtgarten on Wednesday for an evening of reflective solemnity, clever comedy, and waves of love pulsating from the stage. You’ll want to give the guy next to you a hug.

From a master of Flamenco guitar to Finnish circus performers, Düsseldorf’s Autumn Culture Festival presents an impressive array of modern new works for the stage and the concert hall. See the South Korean dance-theatre company Eun-Me Ahn perform “The Life of Princess Bari” this weekend.

Two of artist Alex Katz’s biggest inspirations – his lovely wife Ada, and the landscape of his beloved Maine – take centre stage in the 50 prints that comprise this new exhibition at Frankfurt’s Jewish Museum. Utilizing a variety of printing techniques, Katz’ images relay a cool serenity with smooth contrasting tones. Check out the show when it opens Thursday and notice the Brooklyn-born artist’s interesting cropping style.

Got a craving for Frikadeller? Enjoy traditional Danish cuisine Saturday at Hamburg’s HafenCity Summer Festival. Germany’s northern neighbour is the guest of honour at this harbour-side event. There’s lots of activities for the kids too, like Hans Christian Anderson fairy tales and a Build-a-Bear workshop.

What’s the best thing about Oktoberfest? The parades of course! Find a comfortable spot on Maximillianstrasse Saturday and wave to the Dirndl- and Lederhosen-clad revellers as they make their way to Theresienwiese for the tapping of the kegs. The Parade of the Oktoberfest Breweries is followed by Sunday morning’s Costume and Riflemen’s Parade.

Get a front row view of what goes on behind the scenes at one of Germany’s grand theatre Saturday. The State Theatre on Gärtnerplatz’s open house features tours, workshops, a flea market, and a sneak peek at the coming season. But the most spectacular part of the event is the open mic for those who fancy themselves orchestra conductors and opera singers. Live the dream.

Papa Schichtl – The Carny and the Vaudeville Artist

if you’re in town for Oktoberfest, balance your beer consumption with art consumption by heading to the Beer and Oktoberfest Museum. Works by the artist and vaudeville circus owner Michael August Schichtl offer an interesting look at Oktoberfest shenanigans at the turn of the 20th century.