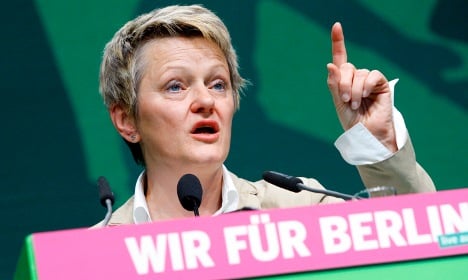 The co-leader of the Greens’ parliamentary group and former federal consumer protection minister might not be a Berlin native, but she has lived here for over 30 years. Back in the 1980s, she was one of the first to join the Alternative Liste, which eventually coalesced into the Berlin Green party; today, she’s one of the city’s most successful female politicians.

Ben Knight spoke to her ahead of this Sunday’s state election in Berlin.

Well, in the Anglo-Saxon world, it wouldn’t be a problem anyway. You say the first name, put a friendly “you” in behind it, but you still know what is formal and what is informal. People call me Renate.

What do you make of some of your opponents’ campaign slogans? For example, our favourite, the FDP’s: “We think it would be a nice gesture to order a croissant in Paris, and not a roll.”

I don’t really understand it. For a start, that isn’t really a nice gesture. I think you should order both in Berlin. Berlin is a multicultural city where you can get rolls and croissants.

The CDU has, “Straight. Correct.”

Not sure what that means.

What about the SPD: “Understanding Berlin”?

After being in power in Berlin for 22 years, how can they claim to understand Berlin with their miserable record? People are trying to understand the SPD. Are they still in command? Are they even doing anything at all? Someone had written on one of the posters, “Understanding the SPD.” That’s good, isn’t it?

How do you understand Berlin?

Berlin is a brand all to itself, worldwide but also for us Berliners, no matter where you live in Berlin – Mitte, Lichtenrade, Marzahn or Frohnau. This casualness, the acceptance of different lifestyles. Berlin has really sucked up diversity like a vacuum cleaner – diversity of religion, etc. I don’t want to deny the fact that there is discrimination and xenophobia here as well. But the main thing about Berlin is that it has much more potential. Berlin can do more – better education, more jobs.

“Urban technologies” is the modern phrase for the solution we need. All cities have the problem of how to deal with demographic change – they need more flats that elderly and disabled people can access. All cities also need to know how to cope with climate change and more expensive raw materials. Living space and transport need to be intelligently organized with new technologies and solutions. We need to combine the social and the ecological. Berlin could be the model of how this can work.

People in Berlin identify themselves strongly with their local Kiez (neighborhood). What’s your Kiez?

I don’t have one Kiez. I lived in Friedenau until recently. Now I live in Charlottenburg. But I move around the whole city. Let’s take the example of Friedenau. I had the “Kiez feeling” – people knew each other and chatted in the shops, and then I would get on the S-Bahn and, within 10 minutes, get out at Oranienburger Straße on the corner of Tucholsky Straße, and I’d be in a different world. That’s what makes Berlin – it is both Kiez and metropolis.

What’s your favourite place in Berlin?

My balcony is always a favourite place, where I can check on my tomatoes and rosemary. I have different favourite places for everything. I love discussing something over breakfast in Cafe Einstein on Unter den Linden. I have my favourite Italian restaurant, a simple place with red-checked tablecloths, where the pasta is homemade. It’s my second living room. And of course the green spaces are very special in Berlin. The Tiergarten. The Gardens of the World in Marzahn.

A lot of people are worried about the rapid modernization of the city in places like the Spreeufer. Do you share their concern?

I think it’s a misunderstanding to say this is a fear of modernization. What they’re concerned about is that there’s no plan. I think there’s been no plan since the fall of the Berlin Wall. Neither the SPD nor the CDU nor the SPD-Left coalition had a plan for how Berlin should be. Who do we want to be in 10, 20 or 30 years? Under the current coalition, the only plan seems to be to sell property to the highest bidder. There’s no structure. I don’t understand it. How can it be that Social Democrats have no social thoughts? There’s no vision.

Rising rents and the property issue?

There needs to be a plan! You can’t just flog properties – instead, you have to say a certain proportion has to be sold under concrete social or ecological conditions. There need to be places that are reserved for someone who has an ecological model, or a multigenerational model, or something with better disabled access. Or the city government can say there needs to be a certain quota of affordable homes in certain areas. All that is possible. Munich does that. We can say, “20 percent of these properties need to become affordable homes.”

Do you see the proliferation of holiday flats as a problem?

We have a huge boom at the moment because Berlin has become so hip. I wouldn’t use the word, “problem,” but I would try to define our task as politicians. Our task is to organise and preserve the communal well-being. We want tourism, obviously. Tourists spend money here, which creates jobs.

But we also want people to be able to live here all year round. It’s unreasonable for people who have to get up at five or six in the morning to constantly hear doors slamming at 4:30. A communal society has to be structured. It’s about finding limits and compromises. That doesn’t mean you’re ‘anti-tourist’. But if Berlin was just full of tourists and hotels, then the tourists would stop coming. They want to see Berliners too!

But didn’t the Greens in Friedrichshain-Kreuzberg make a huge PR mistake with their “Help, the tourists are coming!” meeting?

I don’t know if it was really a mistake or if it was maybe overly negatively reported. Their slogan had an ironic tone. They held an event because there really is a lot of pressure in that Kiez, and of course there were a few inhabitants who expressed themselves a little sharply. But if you look closely and don’t just report the verbal extremes, you realize that people are also prepared to make suggestions. Just because you ask a critical question doesn’t mean you’re suddenly against everything. No, we live in a 21st-century democracy; we’re free citizens in a free country, and that means you’re allowed to ask a few critical questions. You don’t want to live in a boring city, do you?

But some people can’t take part in that democracy. Do you support the symbolic elections for the city’s foreigners?

I think it’s a good project. Firstly, because I’m interested in the result of that election, and secondly, because it points to a problem, namely that up to 13 percent of our population can’t vote at all. Our suggestion would be to introduce a proposal to allow residents from non-EU countries to get the right to vote in municipal elections. I think people who live here long term should have the right to help decide what happens where they live.

But the ultimate aim of this campaign is to get non-Germans the right to vote at a national level. Would you be in favour of that?

We already have a constitutional problem with the municipal vote, because if our proposal were accepted, then I’m sure it would end up in Germany’s constitutional court. I hope they will allow it.

Otherwise I think the question of dual nationality is a more pressing issue. If we make it easier for people to get dual nationality, then they will have the right to vote anyway.

Is the Green party still alternative? Have you become part of the mainstream political establishment?

We’re not like the SPD, who just say, “Making flats ecological will burden tenants.” No. we have to protect the climate – that’s for all people. And we need to build the flats so that they don’t have such high energy costs. We need to develop a path that brings both together. We don’t just say, “Poor but sexy.” We say, “There need to be jobs, new jobs.” And we will create them by combining the jobs with central problems like climate change. We need to make the infrastructure available so people can live differently. That is Green and that is still radical.