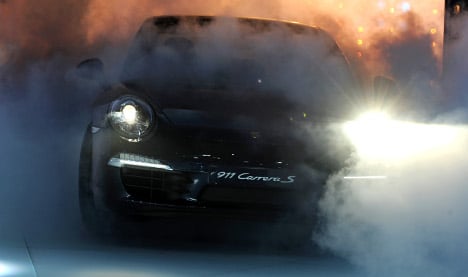 “For the moment, our industry has been unaffected by the financial market worries.

“The economy remains very challenging and consumers are jittery – particularly in the eurozone – but we remain optimistic,” insisted Ford Europe chief Stephen Odell.

Nevertheless, just beneath this defiant display of optimism was a sense of growing unease that the chronic eurozone debt crisis and signs of economic weakening in both Europe and the United States could soon dent the prevailing optimism in the sector.

The industry has enjoyed two years of growth, thanks not least to special government-backed car trade-in schemes. So insiders are convinced a correction will come, even if no one is talking yet about an outright recession.

If the current turbulence persists, “it could of course affect the ‘real’ economy,” Daimler’s Zetsche said.

And given the importance of the auto industry for the economy as a whole, car makers would be among the first in line to feel the pinch.

“We’re expecting a slower pace of growth in the future,” said BMW finance chief Friedrich Eichiner last week, while ruling out a recession.

The head of General Motors’ European arm Nick Reilly said US auto giant was expecting slow sales growth this year and next year.

The European market would remain “pretty static actually, (with) a little bit of growth in the US and continued growth in China,” he said.

French giant PSA Peugeot Citroen was even more pessimistic and already preparing itself “for more difficult times,” according to its chief executive, Philippe Varin.

“The context is one of weak growth or even recession. We just don’t know,” Varin told reporters, warning that his group could put employees on short-time work and was already cutting costs.

German carmakers say they were equipping themselves for another possible downturn and could resort to cutting working hours or other measures they used during the last crisis.

But industry chiefs insisted it was the politicians who held the cards for avoiding a full-blown crisis.

“Political action and vision is needed,” said Daimler’s Zetsche, slamming what he called a slow and ineffective response so far.

Ford Europe’s Odell said, “My request to politicians is that even if the medicine is painful… we need to apply it quickly and robustly so we can have a sustainable base,” not just for the auto industry, but for the global economy as a whole.

With more than 1,000 exhibitors from 32 countries crowding into 235,000 square metres of the vast halls of Frankfurt’s “Messe” trade fair, this year’s “Internationale Automobil Ausstellung” is 25 percent bigger than the last one in 2009.

Held every two years, the IAA is the biggest and most important show of its kind in the world.

It opens its doors to professionals on Thursday and then to the general public on Saturday and will run until September 25.

Over the entire 10 days, the organisers, the German auto sector federation VDA, are hoping to attract as many as 800,000 visitors in all.

That forecast was seen as prudent since the number was already surpassed two years ago when the last global economic and financial crisis was at its height.

In spite or perhaps because of this, the sector is pinning its hopes on new models, with a total 89 to be unveiled this year, 45 of them by German carmakers alone and parts suppliers are scheduled to premiere 94 new products.

Topping the bill will be hybrid and electric engines and small cars.