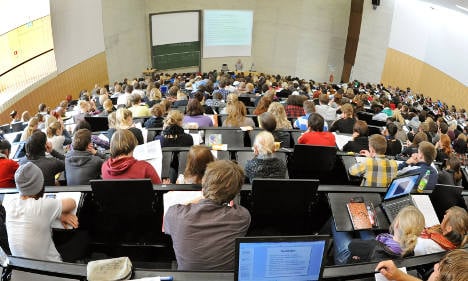 In its international report on education published on Tuesday, the OECD said: “Germany’s contribution to the global talent pool has been shrinking rapidly.”

Of the age group now leaving the world’s work force, 6.3 percent of the highly educated people are from Germany, while just half of that proportion – 3.1 percent – of highly qualified people aged between 25 and 34 entering the work force are German, the report said.

“This is not just because emerging economies like China have a rapidly rising impact on the global talent pool; it is also because growth in the number of highly educated individuals has been exceptionally slow in Germany,” it said.

“Among 55 to 64-year-olds, 2.46 million individuals in Germany have attained a tertiary qualification while among 25 to 34-year-olds, the number is, at 2.48 million, only marginally higher.”

The number of people with higher education more than doubled between those generations, from just over 39 million to more than 81 million among the 36 countries with available data.

The report says that what it described as sluggish growth in the supply of highly qualified people, was one reason why rewards for these people were increasing in the German labour market – while those without basic qualifications face deteriorating conditions.

Prospects for higher education graduates in Germany improved even during the last few years, with their employment rate increasing by 0.6 percent from 2008 to 2009, at the height of the global economic crisis, the report says.

And although graduates in Germany earn significantly more than their worse-educated colleagues, the supply of highly educated employees is not keeping up with demand. Thus the wage difference between a male employee with a degree against one without rose by 16 percent between 1999 and 2009, the report said, while the effect for women was even greater, with the difference rising by 31 percent in the same time.

Germany ranks just 23 out of the 27 OECD countries in its proportion of university graduates with 29 percent, well below the OECD average of 39 percent. Yet at the top of the scale, Germany is fifth among the OECD countries when it comes to graduation rates from advanced research programmes, with 2.5 percent. It is also fifth for adult participation in job-related non-formal education, after Sweden, Norway, Finland and Switzerland, the report said.

Yet Germany makes “good use of foreign students,” the report continues, as it charges some of the lowest tuition fees for tertiary education, and has the same fee levels for international and domestic students. Germany is the destination for seven percent of all international students – the fourth most popular destination for foreign students behind the US (18 percent), the UK (9.9 percent) and Australia (seven percent), the report said.

And a respectable 25 percent of foreign students in Germany go on to get a job in the country and stay around – the sixth highest rate among the countries with available data, the report said.

Yet the benefits of higher education for the individual are hit by the high tax and social contributions paid while in employment in Germany, with 67 percent of the additional gross earnings a man makes thanks to a degree being paid in one way or another, to the state.

The association of further education heads, the Hochschulrektorenkonferenz said it viewed the data with concern. “The share of financing for education must increase more clearly than until now,” said Margret Wintermantel, president of the association.

“Germany cannot keep up within the dynamically developing education sector world wide in the long term if it keeps taking these steps which, in international comparison, are only small.”