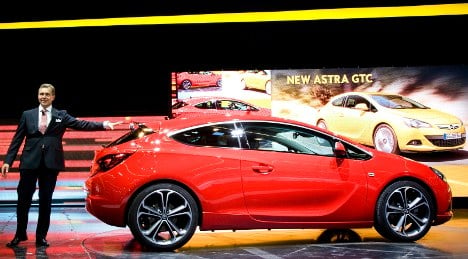 “We are not trying to get into the premium European segment, which is BMW and so on. We’re definitely not trying to compete” there, Reilly told reporters at the IAA motor show in Frankfurt.

“What we’re trying to say, though, is that we feel the product range we’re coming out with can stand against anything that is in the volume market… so the Volkswagens and anybody else, we can compete with,” Reilly said.

Opel was priced “a bit below that” in the past, “but we don’t need to any more,” he said.

Improved designs and quality and cost-cutting have recently allowed Opel and its UK sister brand Vauxhall – which have faced image problems in the past – to boost volumes and return to modest profits.

Given the current eurozone debt crisis, GM’s expectations for this year and next year did not foresee rapid sales growth, Reilly said.

The European market would remain “pretty static actually, (with) a little bit of growth in the US and continued growth in China.” For the industry as a whole, GM was pencilling in total car sales in the whole of Europe to be in a range of around 19.6 million vehicles in 2012, he said.