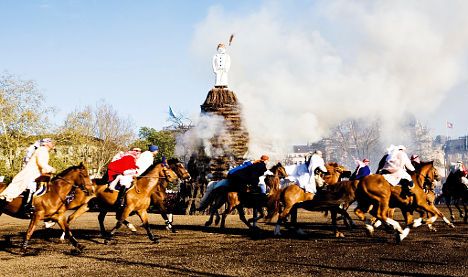 Wearing medieval costumes, the Fraumünster women’s society proudly marched alongside men for the first time in the main Sechseläuten parade through the city centre in May 2011.

On its website, the women’s society thanked the guild masters for inviting them to Sechseläuten 2011 and said they “look forward to the forthcoming combined Sechseläuten in 2012“.

However, the men’s guild association has now voted against women’s participation becoming a regular occurrence, saying it only allowed them to join in 2011 because of “the cultural and charitable engagement of the women’s guild“, DRS television station reported.

The necessary two-thirds majority which would have guaranteed the Fraumünster society a regular “right to hospitality“ was not reached, according to a statement from the men’s guild association

Traditionally, only men march in the Zurich Sechseläuten parade with the exception of honorary female guests. In the past, women have taken part in the “Kinderumzug“ (children’s parade) on the Sunday preceding Sechseläuten.

The men’s guild also said that their female counterparts may in future use another route or pass through the inner city half an hour before the official parade, like they did before.

Sechseläuten, or Sächsilüüte in Zurich dialect, refers to the ringing of the bells at six o’ clock to celebrate the changeover to summer working hours.

It is a traditional end-of-winter celebration that has taken place in the city since 1902, although its roots go back much further. After the parade, a huge “snowman“ effigy called the Böögg or bogeyman, is packed with explosives and burned while the guildmen ride around the bonfire on horseback.

The Fraumünster Society, whose name comes from the Fraumünster abbey founded in 853 and the Zurich cathedral of the same name, was established in 1989 as a non-denominational group with the goal of organising cultural and social events and honouring Zurich women for their work.

Photo: Basel Tattoo
What is it?
Basel Tattoo is a show and parade bringing together military music bands from around the world.
How did it start?
Organizers had the idea for the event after a Basel-based military band performed several times at the Edinburgh Tattoo, the world’s most famous event of its kind. The first edition of Basel Tattoo was held in 2006, attracting an impressive 38,000 people to the courtyard of a military barracks in Kleinbasel.
So it’s a big deal?
It is now. These days it’s sponsored by the Swiss federal defense department and over the years has become bigger and bolder, attracting more than one million spectators over all its shows. More than 60,000 tickets have been sold to this year's shows so far.
What happens during the Tattoo?
The daily two-hour show includes around 1,000 participants from all over the world. This year’s event features the Hellenic Navy Band from Greece, dancers and acrobats from China, a police motorcycle acrobatic troupe from Germany and a Dutch orchestra. And of course, given its Scottish links, spectators will also enjoy music from ‘bagrock’ band the Red Hot Chilli Pipers, the International Highland Dancers and The Massed Pipes and Drums, a marching band formed of 200 players from around the world, an annual highlight of the show. Add to that an appearance from America’s Got Talent contestant Johnny Manuel and you can’t say Basel Tattoo doesn’t offer something for everyone. Photo: Basel Tattoo
What else goes on?
Each year the Tattoo also stages a parade through the streets of Basel, featuring the international marching bands who are part of The Massed Pipes and Drums, along with other groups. This year’s parade takes place on Saturday 13 July from 2pm and includes pipers and drummers from New Zealand, Australia, Germany, the UK, South Africa, Canada and several other countries, as well as local groups from Basel and elsewhere in Switzerland.
Worth a visit?
Absolutely, though you’ll be one of a large crowd – some 120,000 spectators are expected to turn out for the parade. After all, Basel residents are quite partial to a spot of marching – each year there are several parades as part of the Fasnacht festival, when people even drag themselves out of bed at 4am for a night-time parade.
Anything else going on?
Kids will love paying a visit to the military barracks on 20 July for the Children’s Day, when they can meet some of the pipers and dancers, ask questions and try out musical instruments. Best of all, it’s free.
How do I buy tickets for the show?
Find out more about the event and buy your tickets here.
SHOW COMMENTS
Url copied to clipboard!