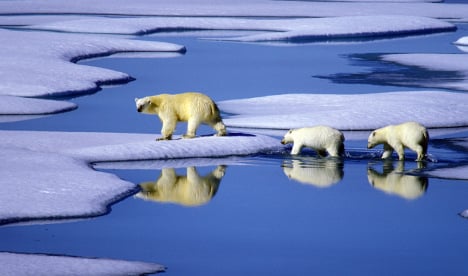 Georg Heygster from Bremen University on Monday said that his team was generating daily measurements by combining data from several satellites. The area covered by ice is smaller than ever previously measured in mid-September.

“The ice retreats every year during the summer, from around 15 million square kilometres to around five million,” he told The Local.

“There was a low around 2007 – 2008 and it is important to see that the minimum measurements since 2007 are lower than the minimums measured before then. The ice coverage is clearly down over these last few years. Politicians need to wake up and really do something to limit carbon dioxide emissions.”

He said the retreat of the summer sea ice was around 50 percent since 1972. The low of 2007 – at 4.267 million square kilometres – has now been surpassed, with the current area 27,000 square kilometres less than that.

He said algae and small animals which live on the underneath of polar ice were going to be badly affected by the reduced area of permanent ice.

“Although much of the ice that melts refreezes again in the winter, algae and small animals need a few months to colonise new ice and annual ice is not around for long enough for this to happen,” he said.

“The fact that we are also observing accelerated summer melting, with smaller areas of permanent ice will reduce the amount of this kind of life – which is the first link in the food chain. That food chain goes all the way up to seals and polar bears.”

He said the increase in carbon dioxide concentrations over the last century and a half has affected global temperatures, and that computer modelling has confirmed that no other factor could have had such an effect.

The burning of fossil fuels is accepted by the vast majority of the scientific community as the main factor behind the increase in carbon dioxide concentrations, and thus global warming. “This is no longer controversial,” said Heygster.

Although the decrease in the Arctic ice cap does not contribute to rising sea levels, as the water concerned is all sea water anyhow, Heygster said the melting Arctic ice indicated that further melting of glaciers and other non-sea water ice masses should be expected – and this will increase sea levels.

Computer modelling conducted at the Polar Science Centre at the University of Washington in the United States, also presents an alarming picture. This suggests that the volume of Arctic ice was 5,000 cubic kilometres last month – 62 percent lower than the mean monthly averaged ice volume over the period 1979 to 2010.