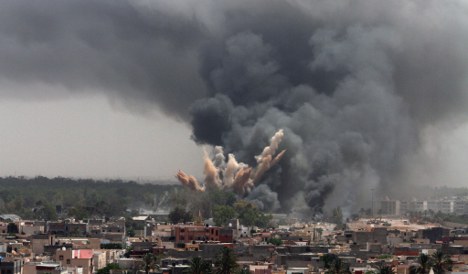 The German Defence Ministry made the admission on Friday in its reply to a request for information from Green parliamentarian Hans-Christian Ströbele. Up to now it had been assumed that only 11 German soldiers were involved in the NATO operation.

The ministry said that 103 German soldiers had taken part in the selection of bombing targets against the army of Libya Dictator Muammar Qaddafi, as well as issuing orders to AWACS, NATO’s airborne warning and control system aircraft.

Ströbele has argued that the German parliament should have been asked for permission to allow the soldiers to participate. The Green Party is now considering filing a constitutional complaint against the government.

The previous admission that 11 German soldiers were involved in the mission came in August in response to a request from Ströbele. Defense Minister Thomas de Maiziere said at the time that the use of German soldiers in NATO operations is standard practice and does not require parliamentary approval.

“This practice contradicts every public declaration by the government of not wanting to be involved militarily in NATO’s Libya mission,” he said.

Relations between Berlin and its NATO allies have been strained since Germany refused to play a major role in the NATO efforts to hinder Qaddafi’s military advances against rebel forces. It also abstained from voting on a UN resolution backing military action.

But a representative for US President Barack Obama said earlier this month that the US was pleased with Germany’s current attitude toward helping Libya’s reconstruction.