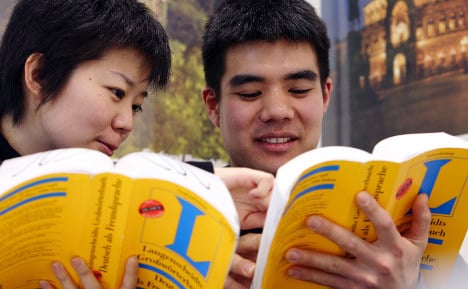 So why the steep decrease in popularity?

And because of limited financial resources, other countries often only teach one mandatory foreign language: English.

“Nothing against English,” Makowski said, explaining educators simply needed to be more creative when making language decisions are made. For instance, classes, such as history, biology or geography, could be conducted in English, leaving room for students to learn another foreign language like German.

However, in Britain, where second languages are optional from the age of 14, reduced numbers of students have picked modern languages in the last two years

As an underlying mission, the Goethe Institute exists so that the knowledge of foreign languages, specifically German, is seen as something positive, or even considered necessary, “of course according to personal interests,” Makowski said.

For short-term travellers to Germany, though, the need to understand German is basically obsolete.

“It isn’t important at all because you get by with speaking English,” said Janette Schuchman, deputy director of the German National Tourism Office. “The Germans have to learn (English) from an early age and many of them really like practising.”

Instead, according to Goethe Institute, interest in the German language often peaks along with celebrity exposure in the media. Popular bands can help attract new German learners – after a recent Tokio Hotel tour, interest in German courses raised dramatically, the Goethe Institute said.

Pop culture and travel aside, most people who learn German hope for a concrete outcome: improved career opportunities.

“The old motivation, to learn the language of the poets and philosophers, to read Goethe or Kant in the original text, is generally not the case today,” Mokowski said.

“People know that Germany is an important economic factor.”

In Poland, as well as in countries such as India and China, interest in learning German remains high. Japan and Korea, for example, count German as an official education language. The number of German learners in Brazil has also increased.

France, on the other hand, shows a downward trend in people learning German, while interest in countries from the former Soviet Union is also declining.

In the 1990s – in conjunction with the fall of the Iron Curtain – the number of German learners in Eastern Europe was extremely high. Today, according to the Goethe Institute, the numbers have levelled out.

All in all, Makowski remains relaxed about the number of German learners abroad, remembering languages also have something to do with demographic development.

“The position of the German language worldwide isn’t nearly as poor as is always talked about,” he said.