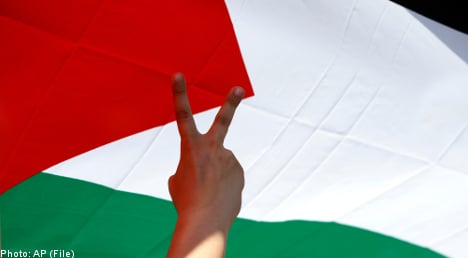 “This means a significant step forward for us, which we appreciate hugely,” said the newly appointed ambassador, Hala Husni Fariz, to news agency TT.

Bildt received the new ambassador on Thursday, making her the first Palestinian representative to be formally welcomed at a ceremony at the foreign ministry.

Fariz, born in 1955, is the highest ranking Palestinian representative in Sweden since the delegation arrived earlier this year.

According to Fariz, the Swedish government has been an important aid giver in the development of the Palestinian state and institutions as well as having made a clear stand on wanting a peaceful and fair two-state solution in the region.

”This is the climax of a long relationship with the Swedish government and we appreciate the support and help that we have received,” she said to TT.

”It is now important that the parties resume negotiations leading to a two-state solution and the creation of a democratic and sustainable Palestinian state, side by side in peace and security with Israel,” said Bildt after the meeting with the new ambassador.

In two weeks the UN general assembly will gather in New York and the Palestinians are anticipated to demand independence through the representation of president Mahmoud Abbas.

If the question is raised on the security council, the US is expected to veto the demand.

Fariz did not want to comment on what the new status of the Palestinian representation in Sweden will mean to the UN process.

”It is, of course, up to Sweden to make their own decision,” she said to TT.

Spokesperson on foreign policy for the Liberal party, Fredrik Malm, said on Thursday that he regrets Bildt’s decision to upgrade the Palestinian representation in Sweden.

”It is regrettable that Carl Bildt has made this decision and it is unfortunate that it happens just at the time when the UN is set to discuss the recognition of the Palestinian state,” he said to TT on Thursday.

According to Malm, Sweden should take a more balanced stance in the Middle Eastern conflict and work for a two-state solution and a peaceful settlement of affairs.

Malm also says that the decision has been taken by Bildt without consulting the other government parties.

”Not that I am aware of anyway. I just found out,” he told TT.

The spokesperson for foreign policy for the Christian Democrats, Désirée Pethrus, is also surprised.

“I am surprised that the decision for the change comes now when the issue is such a hot potato in the UN,” she told TT.

According to Fariz, however, the timing for the upgrade has nothing to do with the closeness to the UN talks.

“We were informed of this step a few months ago,” she said to TT.

The 29-year-old was wearing a top with the Israel Defence Forces (IDF) logo when the attackers started harassing him on Friday about his religion, the police added, calling it “an anti-Semitic attack”.

Officers are seeking the assailants, who fled immediately after the attack, on suspicion of a politically-motivated crime.

Saturday is the second anniversary of an attack by a far-right gunman on a synagogue in the eastern German city of Halle, who killed two in a rampage when he failed to break into the house of worship.

It was one of a string of incidents that led authorities to declare the far right and neo-Nazis Germany’s top security threat.

Also this week, a musician claimed he was turned away from a hotel in eastern city Leipzig for wearing a Star-of-David pendant.

While the allegations prompted a fierce response from a Jewish community unsettled by increasing anti-Semitic crimes, several investigations have been mounted into contradictory accounts of the incident.

“The threat is complex and comes from different directions” from jihadists to the far right, the federal government’s commissioner for the fight against anti-Semitism Felix Klein said recently.