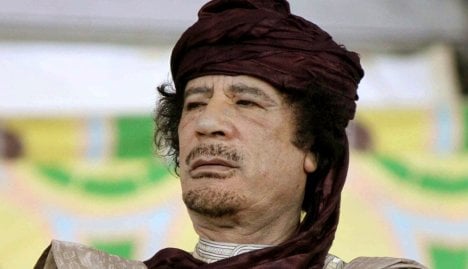 “It mainly concerned information regarding the fight against terror – and therefore Germany’s security interests,” Bernd Schmidbauer, the former minister of state in the chancellery and intelligence coordinator from 1991 to 1998, told German newspaper Bild am Sonntag.

“The Libyan intelligence service had access to sources that the German services did not. With the help of this information, we were able to fend off terrorist threats targeting our country.”

On Friday, US daily the New York Times published a report based on documents found at the abandoned spy service in Tripoli, which suggested that the Central Intelligence Agency, as well as Britain’s MI-6, had established ties with their Libyan counterparts under Qaddafi.

The papers, whose authenticity could not be verified, also pointed to cooperation between the two sides on an operational level, with the US purportedly sending terrorism suspects to Libya for questioning.

Schmidbauer said Germany did not engage in joint actions with the Libyan spy service, telling Bild am Sonntag, “We never crossed this line.”

The Libyan rebels’ new ambassador to Germany, Ali Masednah al-Kothany, called for an investigation into cooperation between the Qaddafi regime and Western governments.

“After the decades-long dictatorship, there are many things that must be investigated in Libyan, and that includes the regime’s contact with Western intelligence services,” al-Kothany said.