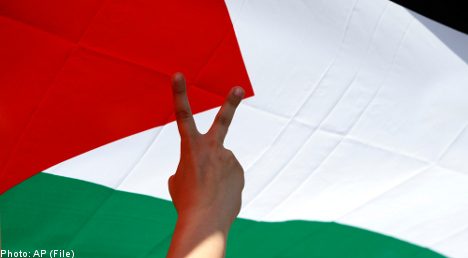 The issue is set to be brought to a head in approximately a month when Palestinian President Mahmoud Abbas is due to address the United Nations to demand recognition of a Palestinian state.

The Social Democrats and the Left Party want to Sweden and the EU to recognise a Palestinian state while the parties of the centre-right governing Alliance range from cautious to an absolute no.

This weekend, during an informal meeting of EU foreign ministers in Sopot, Poland, the EU’s collective position was discussed.

Currently, Europe maintains a low profile on the issue but with a general sentiment that individual countries with strong opinions on the matter should ideally refrain from any movement on the issue.

The ambition is to stay together to evade interfering with sensitive discussions.

Sweden’s Foreign Minister Carl Bildt (M) posted on his blog that it is important for the 27 EU member states to speak with one voice.

He pointed out that the French President, Nicolas Sarkozy, also called for a united front.

The Swedish government’s position thus far has been that a Palestinian state cannot be recognized until, among other things, the Palestinians gain control over their own territory.

“That is international law’s most basic requirement to recognize a state. Everyone knows that it is split between a Hamas government and a Fatah government in their respective parts of Palestine. It has been our objection and it is how we have based our position,” said Prime Minister Fredrik Reinfeldt.

From the perspective of the Liberal Party (Folkpartiet), a peace agreement between Israel and the Palestinians must first be in place.

“We want there to be two states, there is no doubt, a Jewish and a Palestinian. But it doesn’t work to command it, it must be through a peace agreement. To unilaterally go in and say that one side is right in this conflict would be totally wrong,” said Deputy Prime Minister and Liberal Party leader Jan Björklund.

On the other hand, the Christian Democrats, traditionally a very Israel-friendly party, believe that there may be reasons to consider an official Palestinian recognition as a means to bring Israelis and Palestinians to the negotiating table.

“I think that pressure is needed, something must happen. It cannot be that only one party stops the negotiations,” said Désirée Pethrus, foreign policy spokesperson for the Christian Democrats.

She stated that such a step, to support the recognition, goes beyond what the government’s policy has been thus far and insists the question be discussed.

She referred to the EU’s Union for the Mediterranean (UFM), a joint committee of parliamentarians in the EU and North African nations, that has called for a Palestinian state to be recognized, with East Jerusalem as its capital.

Pethrus also stated that the EU must give hope for change for the Palestinians in the aftermath of the Arab Spring.

“However, our policy of course is that Israel’s security must always be guaranteed,” she added.