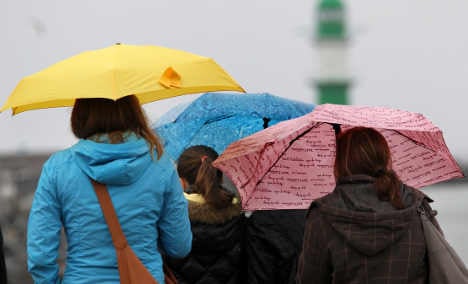 “Summer is cooking with a small flame for the next few days,” said German Weather Service (DWD) meteorologist Stefan Külzer, pointing to the Scandinavian low pressure system “Bert” as the culprit for the cooler temps.

Even where the sun shines, though, temperatures will be below normal summer levels. Northern German states can expect highs of only between 16 and 19 degrees Celsius, while southern states will warm up to 23 degrees, the DWD forecast.

Monday evening will likely bring rainfall to the north, with the weather becoming drier further southward.

On Tuesday, northern Germany will see widespread clouds with possible scattered showers. Central parts of the country will be partly cloudy, while the south will remain mostly sunny as precipitation and thunderstorms stays confined to the Alps.

Wednesday will remain cloudy in the north with rain or occasional showers. Elsewhere, it will be sunny with scattered cloud cover.

Near evening, the clouds will condense, with the first precipitation expected in south western regions. Mid-week highs will hover around 17 degrees in the north, 23 degrees in the south.

Overall, this summer was unusually damp and grey — coming on the hills of an extremely dry and sunny spring.

The DWD analysed results from around 2,000 weather stations across Germany and found that, despite a too-wet, cloudy summer, the average temperature of 16.8 degrees was slightly above the climatic mean. Only the southwestern state Saarland remained cooler than average.

The highest summer temperatures were recorded on June 28 in the North-Rhine Westphalian village of Duisburg-Baerl (36.6 degrees), August 22 in Rheinfelden on the upper Rhine River (36.7) and on August 23 in the Stuttgart-Neckar River Valley (36.6).

The summer low was registered at night on June 2: A frosty 1 degree Celsius in near the Teufelsmoor bog north of Bremen and -3 degrees in the town of Rotenburg on the Wümme River in Lower Saxony.

Germany also received 127 percent of normal summer precipitation during the past three months. The Baltic Sea resort towns of Rostock and Warnemünde received 111.4 litres of rain per square metre on July 22, the highest amount of precipitation in a day. In June, July and August combined, the area was drenched by a total 632 litres per square metre.

Many regions in Brandenburg and almost all of Mecklenburg-Western Pomerania also surpassed their prior precipitation records. The most rain (713 litres per square metre) was recorded in the southern Bavarian village of Oy-Mittelberg-Petersthal.

All in all, Germany averaged 548 hours of summer sunshine, approximately nine percent lower than the climatic mean of 604 hours. The town of Kahle Asten in North-Rhine Westphalia received only 414 hours of sun, the lowest nationwide. In Baden-Württemberg, the upper Rhine River town of Rheinfelden received the most Vitamin D with 688 hours of sunshine.