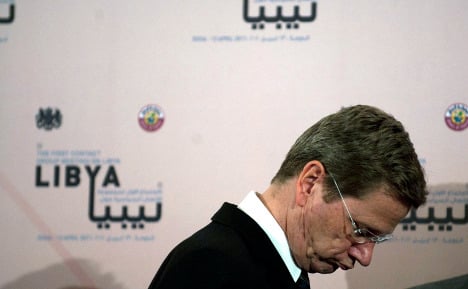 Chancellor Angela Merkel will attend an international conference on Libya’s future in Paris on Thursday, her spokesman Steffen Seibert said.

Seibert told a news conference “we will do everything we can” to provide humanitarian assistance to the Libyan people in the wake of the toppling of the Qaddafi regime.

“The German government is happy the rebels have been victorious,” he added.

Meanwhile, German Foreign Minister Guido Westerwelle made plain his backing for NATO allies who intervened in Libya to enforce a no-fly zone and protect civilians, following a UN Security Council vote in March.

Germany, which occupies one of the council’s rotating seats, abstained on the vote, the only European Union and NATO ally to do so.

“Our respect for France and our other allies in implementing resolution 1973 is all the greater as we had weighed differently the chances and the risks” involved by the intervention, Westerwelle acknowledged on the sidelines of a meeting Monday with French counterpart Alain Juppe.

The French minister, for his part, stressed that “it was only thanks to the international community’s intervention that a real bloodbath was avoided.”

Westerwelle meanwhile faced strong criticism in the German press for saying it was his country’s support for international sanctions against Libya that had been key in winning victory for the uprising.

At the weekend he finally ate his words and publicly acknowledged that it was “the Libyans, with the help of the international military intervention, who toppled Qaddafi’s regime.”

The German minister, who in April relinquished his job as leader of the Free Democrats (FDP), the junior partner in the coalition government, now faces renewed questions over his future.

“A minister on probation,” ran Monday’s headline in the conservative Die Welt newspaper.

“Who will go first?” asked the left-wing Tageszeitung with front-page pictures depicting, side by side, Westerwelle and Qaddafi.

By finally recognizing NATO’s leading role, Westerwelle “has probably won himself some time at the foreign ministry,” said the Leipziger Zeitung. “But his political end, according to leading figures in his party, is near,” it added.

But Seibert Monday said reports of Westerwelle’s likely resignation were “fictitious,” adding that Merkel had “full trust in him.”

There were no immediate details on what aid Germany might give Libya’s National Transitional Council.

A German foreign ministry spokesman said Berlin had already earmarked €100 million euros’ worth of aid for Libya, of which two-thirds had been spent.

He also suggested the international community would move to speed up the release of Libyan assets frozen abroad, adding that €1 billion of these were held in Germany alone.