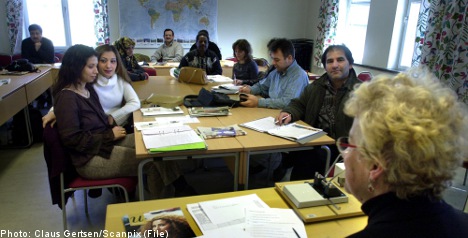 Bonuses of up to 12,000 kronor ($1,900) seem not to have been incentive enough for students in Swedish for Immigrants (Svenska för Invandrare – SFI) courses, as less than a fifth of the government’s money has been spent, Sveriges Television (SVT) reports.

“I had hoped that more would have received the bonus to allow integration,” said integration minister Erik Ullenhag to The Local.

The concept of rewarding quicker completion of language studies has benefited approximately 2,000 students since its introduction last year.

However, only 18.5 million of an allocated 100 million kronor has been spent.

The reform was put in place to encourage a more efficient way of learning Swedish and to make integration into Swedish society easier, though critics have long expressed doubts as to whether or not motivation is the problem.

“The only thing students want is to get a job and start a life here,” SFI instructor Annika Wall told the Dagens Nyheter newspaper last May.

“As I see things, this doesn’t solve any problems. Those who have difficulties and struggle for years aren’t going to be helped by the smartest students getting money.”

For some students, the prospect of a bonus upon speedy completion of SFI classes did indeed serve as a motivating factor.

“It was my sole motivation in finishing the course in under a year,” Australian Oliver Gee told The Local.

“I was in a position where I could benefit from finishing faster, and I knew I could do it, so I didn’t see why I wouldn’t take advantage of that.”

He added, however, that the bonus failed to motivate many of his fellow classmates.

“There were some people in my classes that knew they wouldn’t get the bonus and were not as efficient in learning the language so they disregarded the money and decided to take their time,” said Gee.

Though the bonus has been in place nationwide for a year, Ullenhag acknowledged that the effort is insufficient, saying it would be improved in the future.

“It is quite a new reform and we will evaluate it soon,” he said.

He added that the bonuses were only part of a larger effort to improve SFI, which has long been viewed as a roadblock to immigrants’ successful integration into Swedish society.

“We are also looking at incorporating a focus on better preparing immigrants for potential jobs when studying,” said Ullenhag.

He emphasised, however, that, in the eyes of the government, Swedish language education remains vital in immigrants’ efforts to successfully establish themselves in Sweden.

“We are trying to put out a very clear message from society that one of the most important ways to integrate into the Swedish community is to learn the language,” he said.