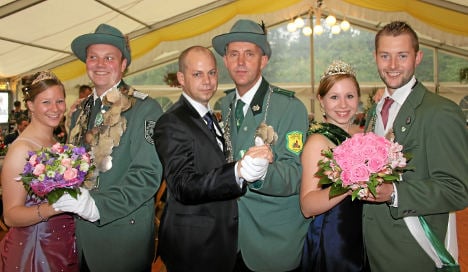 Schützenvereine, as the clubs are known, are normally considered to be conservative bastions in Germany.

But Dirk Winter, a 44-year-old from the western city of Münster, broke new ground this June, by become his club’s top marksman, or Schützenkönig, and naming his long-term partner Oliver his “queen” – a position normally reserved for the wives of heterosexual members.

The federal Schützenverein association decided to allow Winter to take part in a national competition if he left Queen Oliver at home, the group’s spokesman Rolf Nieborg said on Thursday.

Earlier, it looked as if Winter could be disqualified from the most important Schützenverein competition in September, sparking a wave of protest from gay rights groups.

When asked whether Winter would be accompanied by anyone, Nieborg indicated that he would be attending the event alone. Winter was not available for comment.