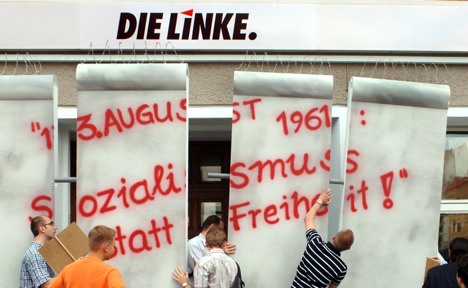 In what is developing into a damaging internal row for Germany’s Left party, Bartsch told state broadcaster SWR on Saturday, “Those who refuse to stand when it comes to commemorating the victims of the Wall should ask themselves whether they are in the right party.”

Bartsch was referring to last week’s incident in the state parliament of Mecklenburg-Vorpommern, when a handful of MPs refused to stand for a minute’s silence called by the session president Angelika Gramkow. Among them was the former social affairs minister for the eastern state Minister Marianne Linke.

Some marginal leftist political groups have justified the construction of the Berlin Wall in 1961 as a necessary measure to protect the economy in communist East Germany, since thousands of people had been migrating West.

But the Left party, successor to the Socialist Unity Party (SED) that ruled in East Germany’s one-party state, officially rejects such arguments. Steffen Bockhahn, party leader in Mecklenburg-Vorpommern, declared in a recent speech, “The construction of the Wall cannot be excused.”

Bartsch called on his party to show unity, and “to keep certain debates in places where they belong, and not carry them out in public first.”