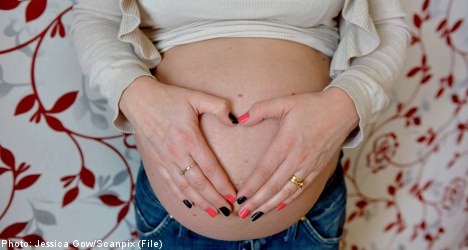 Due to the continued baby boom and the limited number of midwives, many primary care clinics in the Malmö area have quickly had to absorb responsibility for maternity care patients.

“Now we stand exactly where we feared. We are completely overloaded,” Laila Mårtensson, a midwife at the maternity care clinic Famlijens Hus in Malmö, told Sydsvenskan.

Familjens Hus, or The Family House, is one of the busiest maternity clinics in the nation, with midwives often booking appointments during their lunch period.

“We are doing everything in our power to receive the women. We schedule them in, and we use all our administrative time to tend to them, but it is not enough,” Mårtensson added.

In accordance with national health recommendations, a pregnant woman should be offered enrollment into a maternal care program between weeks 8 and 10, which should include all the routine health screens and tests.

However, a pregnant woman who calls a maternal care clinic in Malmö can expect to have only a short conversation regarding her health during week 12, and her actual full enrollment six weeks later. At the latest, it could be week 24 that a woman finally has her first actual appointment.

During the brief health conversations a midwife will ask about the woman’s health, her lifestyle, whether she smokes, drinks alcohol, exercises or is subject to any hereditary risks.

It is only during the actual enrollment, or “inskrivning”, that the routine tests are taken, the actual journal is written and the medical history is reviewed more thoroughly.

Women who receive an enrollment time late in their pregnancy must monitor themselves when it is time for the fetus diagnostic tests and make an appointment on their own for the ultrasound.

“If we have a health conversation in week 13, it’s already too late for the KUB test,” explained Mårtensson about the time sensitivity regarding certain critical screens.

KUB is a combination ultrasound and biochemical test that screens for amongst others chromosome defects such as Downs Syndrome and must be done prior to 13 weeks gestation.

Some politicians have attempted to persuade their local party colleagues in the region not to transfer maternity care to primary care clinics.

“They do not understand what they have done. The idea is good but you cannot make such a big change in such a short time. The primary clinics have not had time to build their organizations for this,” Mårtensson told Sydsvenskan.

The outlook for the autumn remains uncertain and there is still confusion amongst midwives as to which doctors they should refer patients to, where cell tests should be sent and who will lead parenting classes.