“There should be a fine for those who throw cigarette butts on the street. The law should be stricter,” Ulla Hamilton, city councillor for traffic in Stockholm, told DN on Friday.

Accoding to the report, Sweden’s controversial littering law grants police the power to fine offenders on the spot but the Riksdag chose to excuse from penalty those who toss bus tickets, cigarette butts and chewing gum.

While the clean-up of litter costs communities billions of kronor each year, the infant law has reportedly had little effect.

More than 90 percent of Sweden’s municipalities believe that the rate of littering has remained at the same level as before the law was enforced in early July, according to DN.

And some believe that Parliament’s move to exclude certain litterbugs will further damage the law’s effectiveness.

“Allowing some to litter will make it harder to enforce the law. Throwing cigarette butts on the street opens it up to a collective behavior that says that it is okay to litter,” Joakim Brodahl from the Keep Sweden Clean (Håll Sverige Rent), told the DN.

“For police, it is a priority issue. We have to see the crime occur and the public will not accept that we keep watch from park shrubberies,” Bengt Svensson, a police commissioner from the National Police, Rikspolisstyrelsen, told DN.

Irene Oskarsson, a member of the Parliament’s environment committee, said that the police still have a few resources to prioritize this type of crime.

“But the law is good,” Oskarsson said to DN.

Svensson, however, defends the pace of the litter law’s effect.

“This kind of laws will take time before it penetrates the public. This has been the case with the helmet requirement for minors cyclists and the ban on urinating in public places,” police commissioner Svensson said to the paper.

The Keep Sweden Tidy Foundation (Stiftelsen Håll Sverige Rent), has previously tried to identify which groups of people clutter the most.

“Our general profile shows that there are many who litter, but especially male smokers aged 15-19 years are characterized by frequent littering,” said Brodahl to DN. 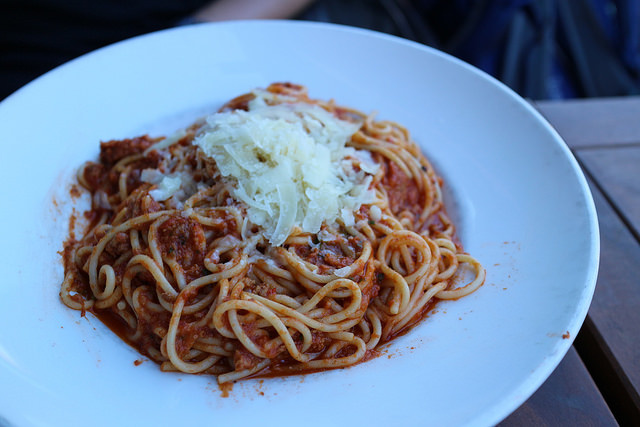 Where do you stand in the Great Pasta Debate? Photo: Elsie Hui/Flickr

“Spaghetti bolognese doesn't exist,” the waiter will likely inform you. “What you're looking for is tagliatelle al ragu.”

'Bolognese' might get its name from the northern city of Bologna, but not only do foreigners usually put it with the 'wrong' kind of pasta (unlike spaghetti, tagliatelle is flat, perfect for picking up chunks of meat), Italians often criticize foreign recipes for bolognese sauce, arguing that the traditional ragu must be cooked a certain way, usually for many hours or even days.

But is that strictly correct? Professional marketer and proud Bologna citizen Piero Valdiserra aims to put the question to bed once and for all with his new book, Spaghetti alla Bolognese: L'altra faccia del tipico (Spaghetti bolognese: The other side of tradition).

It's the first ever to be devoted to the dish and is likely to stir up strong feelings. Valdiserra proposes that rather than shunning spaghetti bolognese, Italians need to accept and even embrace its place in the country's culinary tradition.

He tells The Local that he was inspired to pen the book by the sheer volume of material which had been written on the subject but never presented in a cohesive way.

“The question always elicits strong debate, whether in personal meetings, dinners, in press or on social media,” Valdiserra explained.

He also has a personal connection to the dish. “Ragu or Bolognese sauce has always been important to me. My earliest, strongest and most emotional memories are all of Bolognese sauce, made by my mum, my grandma, and my aunts. In my house – as in many Bolognese homes – ragu is always being prepared and eaten.”

According to the ragu enthusiast, there are four widespread myths about spag bol: that it doesn't exist, that it is 'bad', that it is made with tuna, and that it dates back to World War II. The book debunks each of these urban legends through a comprehensive study of the history and development of the dish, which was first attested as far back as the 16th century.

READ MORE: Why you won't find spaghetti bolognese in Italy

This research led him to a conclusion that's bound to shock food purists: “Spaghetti bolognese actually represents, in every way, a typical product of Bolognese cuisine,” Valdiserra says.

He argues that, if good quality ingredients are used, the dish need not be a disgrace to Italy's culinary tradition and is actually extremely Italian fare, despite being somehow 'unique'.

“Like language, cuisine is a great social institution which does not stand still but changes constantly over time, thanks to the collaboration of many people,” the expert said. “Culinary tradition is simply the accumulation of many small innovations, which are never finished.”

So, spaghetti bolognese's reputation as a perversion of Italian food is undeserved.

The expert hopes that the publication will appeal to anyone with an interest in Italy's culinary tradition, but it also has a more specific purpose.

“It is also aimed at Bolognese institutions, including public bodies, the tourist office and chamber of commerce” he says, and he hopes his defence of spag bol might persuade his native city to take advantage of the Bolognese 'brand' and stop turning their noses up at the twist on their regional dish.

Valdiserra has wide experience in marketing, and believes that the city is missing a trick by distancing itself from the recipe when it could be embracing it, and using it as a vehicle for promoting Bologna and its food.

He's got firm words for anyone who denies the existence of the controversial sauce: “Those who seek to ‘stop’ the evolution of food by fixing it in rigid recipes, fail to understand the deeper spirit of food itself. Cuisine – particularly that of Italy – is life, and like life, it moves, evolves constantly.”

The book also includes a section devoted to poetry inspired by Spaghetti Bolognese (yes, really) and a look at the recipe of ‘classic bolognese’.

So what has the reaction been like in a country staunchly protective of its cooking traditions?

“Initial reactions have been diverse,” says Valdiserra. “The ‘innovators’ have reacted with enthusiasm to the pragmatic approach and openness to the world, while traditionalists are sceptical or critical, if not openly hostile.”

Indeed, foreign 'corruption' of Italian meals frequently makes headlines and has provoked many a social media storm. During the summer, Bologna's airport felt compelled to send a tweet to the low-cost airline, Ryanair, telling them to stop referring to 'spaghetti Bolognese' when promoting flights to the city.

Thank you @Ryanair but #Bologna is the home of tortellini, tagliatelle, mortadella, ecc. but we don't have spaghetti https://t.co/g4EiVVbouo

And a New York Times recipe for White Bolognese – using a mushroom-based sauce with no tomatoes – got plenty of Italians in a simmer just a few weeks later.

READ MORE: Why you won't find spaghetti bolognese in Italy