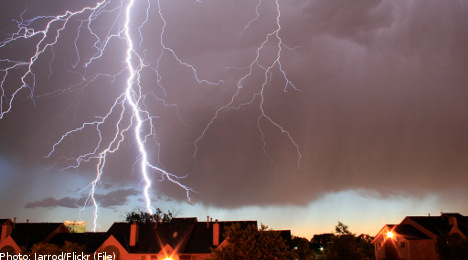 After dinner 12-year-old Alice went downstairs in the basement to take a shower when her parents heard her scream.

Seconds prior to the child’s outburst two loud claps of thunder had suddenly cracked outside and the rain began to pour.

Alice had been struck by lightning in the arm but her parents did not immediately understand what had happened.

The child’s mother, Cecilia Svensson, immediately went downstairs and began to help wash her daughter’s hair when Alice screamed for the second timed.

“She screamed again. She was holding the metal shower hose while rinsing off,” Svensson, who at this point still did not understand what was happening, told local newspaper Göteborgstidningen (GT).

A phone call to an expert on the radio provided clarity.

Although nothing else was damaged in the house, the flash lightening must have struck and travelled, live, through the pipes.

“It could have gone badly,” said Svensson, who also said she learned as a child not to shower during electrical storms but that this localized storm erupted quickly.