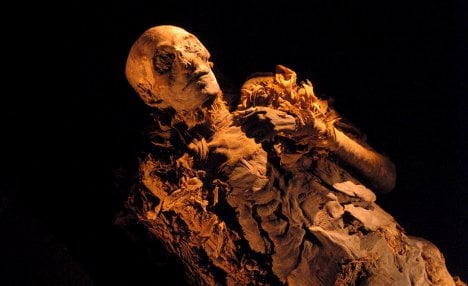 This follows research on the dried up contents of a small flask belonging to queen Hatshepsut, who ruled Upper Egypt in the 15th century BC, and which is now in the possession of the Egyptology museum of Bonn university.

Researchers have been analysing the contents of the flask for the last two years, now concluding that rather than perfume that was assumed, it contained skin lotion.

Egyptian collection curator Michael Höveler-Müller worked with colleagues from the radiology department of the university clinic to conduct a computer tomography scan of the flask. He then enlisted the help of a professor from the ear, nose and throat clinic to use an endoscope to reach into the flask and collect a sample of what was inside.

Dr Helmut Wiedenfeld from the pharmaceutical institute was the next to help out, analysing the contents. It was quickly apparent that it contained palm oil and nutmeg oil. “I immediately thought that no-one would put so much fat on their face,” said Wiedenfeld.

But further analysis revealed that the substance contained many unsaturated fatty acids which are used to treat skin diseases.

“It has long been known that Hatshepsut’s family suffered from skin complaints,” said Höveler-Müller.

The mixture however also include tar residue, a substance now banned in cosmetics because it can cause cancer – but still used on prescription to treat chronic skin diseases.

“If one imagines that the queen had a chronic skin disease and the balm gave her short-term relief, then over the years she may have exposed herself to a high risk,” said Wiedenfeld.

“We’ve known for a long time that Hatshepsut had cancer and perhaps died because of it. Now perhaps we know what caused it,” said Höveler-Müller.

Wiedenfeld suggested that she could have even got the balm from exotic sources. “The Egyptians were practical doctors and good surgeons but lousy internists,” he said. “It is possible that they got their knowledge of certain medicines thanks to their contacts with Persia and India where their medicines were well-advanced even back then.”

Hatshepsut, the greatest woman monarch of the ancient world, is buried in the Valley of Kings, across the Nile from Luxor in southern Egypt.

Her rule is seen as a time of stability and prosperity for Egypt, associated more with commerce than conquest, especially the opening of trade routes to Nubia and Somalia in the south.

Her most famous landmark is her temple at Deir el-Bahari.