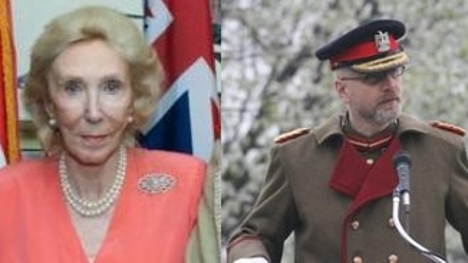 Hours after her body was found, Drath’s husband Albrecht Muth, 47, approached her family with a signed document which appeared to say he would be entitled to up to $200,000 from her estate if she died – a document which police say is a fake.

He was remanded in custody by a court on Wednesday after the judge heard that Muth – who is German but portrays himself as a high-ranking Iraqi soldier and sometime secret agent – had scratches on his face consistent with someone fighting against him.

Drath, a former long-term correspondent for the Handelsblatt and contributor to the Washington Post as well as author of a number of books, was a well-regarded society figure in political circles of the US capital, writing about trans-Atlantic relations and socialising with figures such as Henry Kissinger.

Her marriage to Muth in 1990 has been described in the Washington Post as plagued by infidelity and allegations of violence.

Drath had filed protective orders against him over the last 20 years, telling police in 2006 that he had hit her over the head with a chair, smashed her head on the floor and kept her in the house so she could not summon help. He was charged with assault but charges were dropped because she decided not to pursue the case, the Post reported.

Muth himself was a more than eccentric figure, claiming for years to be a brigadier general in the Iraqi army, and using his wife’s political and diplomatic connections to host political thinkers and journalists at dinners disguised as official Iraqi events. At times he would wear an eye-patch to parties.

“Journalists were lured with promises of hobnobbing with high-ranking members of the Iraqi military,” the Post wrote.

“Muth would don official-looking Iraqi uniforms, signed his e-mails with the title of staff brigadier general and frequently contacted the media – including several Post reporters and editors – claiming inside information about the Iraq war,” the paper wrote.

He would start phone conversations with one reporter by introducing himself as, “Brigadier General Muth here,” and end them saying, “We didn’t talk. Good day.”

A statement from the Iraqi embassy read, “We are deeply troubled by Mr Muth’s claim of his service in the Iraqi military. He is not currently and has never been a member of the Iraqi Army. He does not represent the Embassy, its attaches, the government of Iraq or any government institute in any fashion. In the past, the Embassy was aware of the claims made by Mr Muth and made it clear to all concerned that they were false and demanded that they must cease.”

He has stuck to his story, suggesting to Vice President Biden’s office in an email that his wife may have been killed by a professional working for Iran, the Post reported.

Before being charged, Muth gave an interview to the Associated Press saying he found his wife dead in the bathroom on Friday. Yet he submitted an obituary for her to the Post on Saturday, describing her cause of death as a head injury suffered when she fell, and that she died on Thursday. Her body was not found until Friday, while police say her injuries were not consistent with a fall.

The Handelsblatt wrote in an obituary that Drath had reported from the US for the newspaper for 27 years, initially about the art market, and then on foreign and security affairs. She had married the American military governor of part of Bavaria, Colonel Francis Drath, in 1947 and soon moved to the US with him. There she studied and became a journalist. They moved to Washington together to further both of their careers, before he died in 1986.

She garnered high-octane praise for her 1975 biography of former West German Chancellor Willy Brandt. Author Norman Mailer said it was the best book about Brandt, while former US Secretary of State Henry Kissinger said it was a ‘must-read’. She took part in the discussions of Kissinger’s National Committee on American Foreign Policy and even advised President George Bush senior on European matters.

The paper told how in 1988 she submitted a paper to the American Foreign Policy Newsletter detailing how negotiations over German reunification would eventually be held in a two-plus-four formulation – the two German states, plus the four former Allies. At the time German reunification seemed to be only a very distant possibility, but two years later exactly that was taking place.

Friends have told newspapers over the last few days that they had warned her against her husband. Her two daughters from her first marriage released a statement.

“We are deeply saddened by the loss of our mother and grandmother, Viola Drath. Her intelligence, independence and grace remained intact to the end. Our family is incredibly appreciative of the excellent work of the Metropolitan Police Department,” it said.

Muth is due to appear before court on September 2.