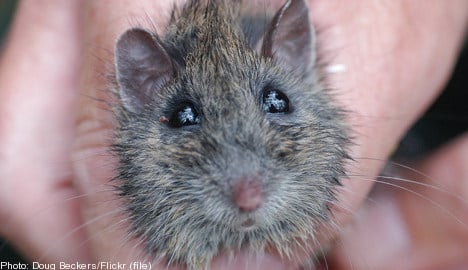 The mouse pictured here is not the mouse mentioned in the article.

“Well, the mouse was never found,” said SAS Head of Press Relations Malin Selander to The Local when asked for an update on the state of affairs.

“We had the Airbus 330 in the hangar with a huge amount of rat traps during the afternoon and overnight.”

Despite exhaustive efforts deployed by staff and security to sniff out any villainous vermin in the aircraft, no such furry invader was ever found.

“The lights were shut off in the plane for a matter of hours overnight just to elicit the mouse, without luck,” Selander told The Local.

Having left some 250 US-bound passengers stranded in Stockholm from 10.30 in the morning until well into Tuesday afternoon waiting patiently to be rebooked, the animal that security personnel had briefly spotted in the aircraft evaded all attempts to be captured.

“When the mouse is not caught in traps even after such a long period of time we do a visual check, and after that all we could do was conclude that it was no longer onboard,” said Selander.

What’s left to wonder is if the illusory intruder was ever, in fact, going to be en route to Chicago.

Selander admits to The Local that the rodent sighting remains a mystery, and will be remembered by SAS as a curious time-consuming endeavour.

“We had many people waiting patiently for that mouse,” she conceded.