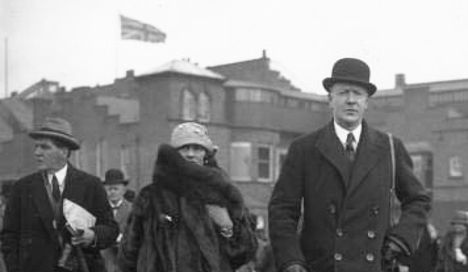 ‘Sleeping with the enemy, Coco Chanel’s secret war’ by the Paris-based writer Hal Vaughan, uses new archive evidence to claim that the renowned couturier was recruited by German intelligence and was a lover of German officer Baron Hans Gunther von Dincklage.

“Vaughan reveals that Chanel was more than just a Nazi sympathizer and collaborator. She was a numbered Nazi agent working for the Abwehr, Germany’s military intelligence agency,” New York publishers Knopf said in a statement.

The book claims that Chanel was recruited by the Abwehr in 1940, aged 57. She was known as agent F-7124 and her code name was Westminster, the name of her former lover the Duke of Westminster. Together with von Dincklage, she went on missions to Madrid and Berlin.

The book claims that Chanel was “fiercely anti-Semitic long before it became a question of pleasing the Germans, she became rich by catering to the very rich, and shared their dislike of Jews, trade unions, socialism, Freemasons and communism.”

Coco Chanel was questioned after the war ended about possible collaboration but she denied all charges. The book lends support to the theory that Winston Churchill intervened to help her escape arrest. The two had been friends before the war.

Chanel fled to Switzerland, returning to Paris in 1954 to build the fashion house that still carries her name. She died in Paris in 1971, aged 87.

Chanel is not the only well-known French artist who is claimed to have collaborated with the Nazis. Maurice Chevalier, Jean Cocteau and Edith Piaf have all been accused of siding with the invaders during the war.

The Chanel group, which has had Karl Lagerfeld as its head designer since 1983, is owned by the Jewish Wertheimer family. In a statement released on Tuesday the company acknowledged that the designer’s role in the war still had “an element of mystery” but that “it cannot be said” she was anti-Semitic.

2005 file photo of German fashion designer and creative director of Chanel Karl Lagerfeld. Photo: STAN HONDA / AFP
The German designer who had quipped “I'd rather die” than be buried was cremated in Nanterre, west of Paris, in the presence of Virginie Viard, who succeeds him as creative director at Chanel, Princess Caroline of Monaco and Bernard Arnault, head of the luxury group LVMH, Closer said on its internet site.
A spokeswoman for the Lagerfeld fashion house had told AFP only that “his wishes will be respected”.
READ ALSO: 'Vanity is the healthiest thing in life': Karl Lagerfeld in his own words
Lagerfeld's ashes are to join some from Jacques de Basher, his great love who died of AIDS in 1989.
Lagerfeld had told de Bascher's biographer Marie Ottavi that some of his ashes were being stored “somewhere secret. One day they will be added to mine.”
Url copied to clipboard!