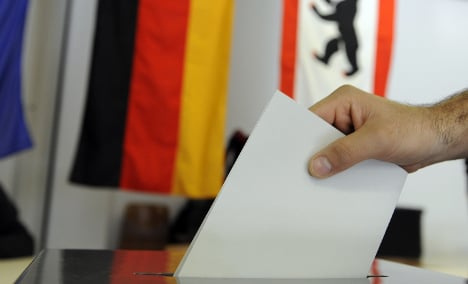 A range of events are being staged across Berlin to fire up a debate about how to people without German passports can become more included in German politics.

Christian Miess, coordinator at the Jede Stimme 2011 association, told The Local the idea was not to promote a particular model of voting rights, but to get people talking about different ideas of how to include more people to vote on the politicians whose decisions affect their lives.

Currently, non-German citizens of other European Union countries can vote in municipal elections, but are barred from taking part in state or national polls. Citizens from other countries cannot vote at all, regardless of how long they have lived or paid taxes in Germany.

There are around 460,000 people living in Germany’s capital who are of voting age, but cannot take part in the decision on who runs their city, according to the group.

Miess said Jede Stimme 2011 was acting as a coordinator and hub, linking many diverse groups from different communities across the city.

“We are connected with many different organisations, many Turkish-German groups and small neighbourhood groups, more than 50 in total. We are also working with the Berliner Fenster which provides the television on underground trains,” he said.

A bevy of locations are being set up across the city where foreigners will be able to vote between August 29 and September 4.

“This is only the first time we are organising the shadow vote, so we have no idea how many people will take part,” said Miess.

“We are hoping for 5,000 or 6,000 but it could be many more. Germans will also be able to vote there – we will have questionnaires on if they want to see voting rights expanded to include other people.”

A string of events are also being organised to get people together to talk about the situation, with each other as well as politicians who have been invited.

One highlight will take place at the Berlin city parliament and will include not only Christian Hanke, Mitte district mayor, but also colleagues from Poland, Luxembourg and The Netherlands, to talk about alternative models of political participation migrants in different countries.