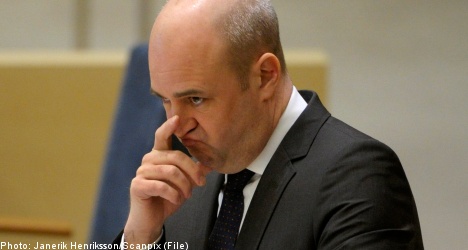 “It is important that this initiative doesn’t just lead to further meetings,” said Reinfeldt to news agency TT.

The idea of closer economic integration within the eurozone is not a new one, said the prime minister, adding that this is not the first time that Sarkozy has called for a closer economic and fiscal policy.

“The best part was decisive formulations on bringing forward the rationalization of state finances,” said Reinfeldt.

He is not in favour of a tax on financial transactions, however.

“I don’t think that it will work unless it is applied globally, for everyone at the same time. What was expressed yesterday was that it would be applied to just the eurozone,” he said.

According to Reinfeldt, Sweden is interesting because it is the only country in Europe with any experience of this kind of transaction tax.

Sarkozy and Merkel also announced on Tuesday that all eurozone members should adopt laws by the middle of next year committing their governments to balanced budgets.

According to Reinfeldt, however, these criteria are already part of the EU stability and growth pact. The most important issue, he argued, is not to make goals but to take appropriate action.

The common single-currency budget was one of French President Emmanuel Macron's key ideas for protecting the euro, but it caused differences between France and Germany, the region's two largest economies.

French Finance Minister Bruno Le Maire and Germany's minister, Olaf Scholz, will “jointly present a proposition on Monday… about the layout for a budget for the eurozone,” the ministry source told AFP.

“It's a major step forward,” the source said. “We will look forward to sharing with other members.”

The source said the amount of the budget has not been established as the proposal was to first set out the “architecture and main principles” of the budget.

According to a copy of the French-German proposal, the budget would be part of the EU budget structure and governed by the 19 euro members.

Macron will travel to Berlin at the weekend to meet with German Chancellor Angela Merkel where the two leaders will bolster their alliance as champions of a united Europe.