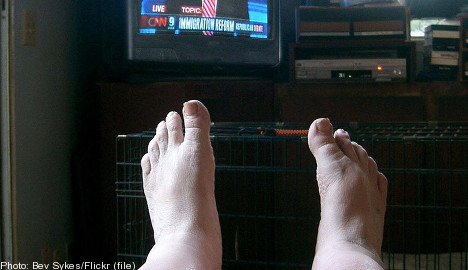 “All the Swedish Prison and Probation Service detention centres should offer the same selection,” the letter said.

According to the inmates it is not uncommon for detention centres across Sweden to offer their detainees 10-19 channels to choose from. But in Kalmar they have to make do with seven.

Prison and Probation service head in Kalmar, Bengt Vestberg, does not agree that inmates are being short-changed.

“It is a question of the cost, really. By law we are obliged to show the basic selection of SVT1, SVT2 and TV 4 at the centre. We have also added Eurosport, CNN and some other channels. We really don’t think we should spend any more than that,” he said to local paper Östran.

That the selection differs at other detention centres is because this is a matter that every establishment has to make according to their own conditions, according to Vestberg.

However, the inmates are upset that the guards, despite the centre’s parsimonious attitude to spending, recently had their security system upgraded with a 22 inch screen.

“That they could afford,” said the letter.

However, according to Vestberg, the police station, which previously was part of the building, has recently moved, causing the detention centre to put a lot of the budget into improving security measures.

“We are always updating technical equipment. It is important as we now have shops and other commercial premises beneath us instead of several floors full of police officers,” he told Östran.