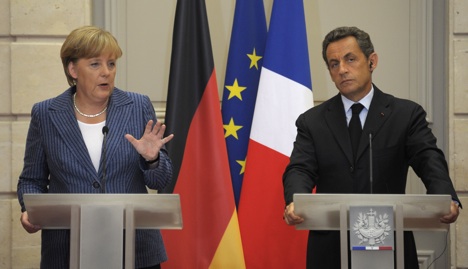 “We’re heading towards a strengthened economic integration of the eurozone,” Sarkozy declared, after just over two hours of talks with Merkel.

Instead, the leaders said member states would be held to a tougher fiscal standard and new cross-border controls be put in place.

Sarkozy told reporters at the Elysee Palace that all eurozone members should adopt laws by the middle of next year committing their governments to balanced budgets, on the model of Germany’s widely admired constitution.

The summit had been keenly awaited by Europe’s jittery financial markets, which dipped sharply during the day on reports that it would not produce much of substance and it was not immediately clear how traders would react.

The pair’s announcement was scorned by some economists, who decried the decision not to consider eurobonds nor to beef up the stability fund – which most judge insufficient to bail out a country the size of Italy.

“The Franco-German meeting has not produced anything new or useful,” said

“If this is all they had to say, what was the point of having this meeting? I fail to see how a balanced budget amendment… or even a financial transaction tax will tackle the euro crisis, help stimulate growth or even strengthen the weak EU banking system,” he said.

A note to investors from bankers VTB Capital agreed, saying: “Investors might be left wondering what was the point of this meeting.

“Plenty of well-intentioned rhetoric as usual and more austerity and closer fiscal surveillance overseen by the Euro Council, but no silver bullet to resolve debt and banking crisis,” it said.

“It’s a bit disappointing,” said Yves Marcais, a stockbroker at Global Equities in Paris. “It’s all a bit vague.”

And Rene Defossez, a bond strategist at Natixis, said: “The only thing that could defuse the crisis is creating a market for eurobonds … then the market would think twice about attacking a country.”

But the leaders put a brave face on the proposals.

“I am confident in the economic prospects of the eurozone and of the world,” said Sarkozy, who last week broke off a holiday to plan austerity measures and quash rumours France was to lose its Triple-A credit rating.

“I’m not at all pessimistic about growth prospects,” Merkel added.

France’s growth is stagnant and earlier in the day Berlin announced that German growth was down sharply in the second quarter. Brussels said eurozone growth as a whole had slowed to a measly 0.2 percent.

“The German and French finance ministers will put a joint proposition for a tax on financial transactions on the table of European institutions from next month, September,” Sarkozy said.

The French leader repeated his pledge to reduce France’s public deficit to under three percent of GDP – the theoretical EU maximum – by 2013, and said other eurozone members should adopt the so-called “Golden Rule.”

This would take the form of a law, like the one he is in the course of pushing through in France, that would force governments to adopt a public strategy of returning to balanced budgets within a limited time-frame.

Merkel said issuing eurobonds would not be helpful “today” and Sarkozy said such an instrument would put Europe’s stronger economies “in grave danger” and would only be possible at the “end of a process of integration.”