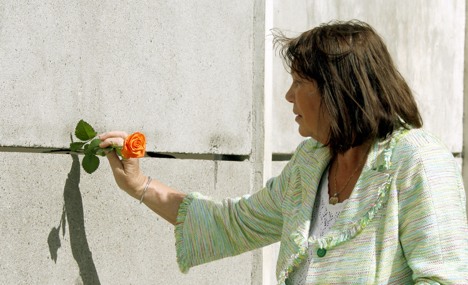 The sudden move by communist East Germany to close the border in 1961 shocked the world and ripped a hole through Berlin that gaped for more than 28 years until the Wall finally fell on November 9, 1989 in a bloodless uprising.

The commemorations began overnight at a chapel on the former death strip with a more than seven-hour-long reading about the lives of those killed seeking freedom.

President Christian Wulff, who will make the keynote speech, said the anniversary was an occasion for Germans to reflect on how far they have come since the darkest days of the Cold War.

“We have reason to be very pleased to live here and now,” he told Saturday’s issue of Die Welt newspaper.

“We can look with pride to East Germans’ irrepressible desire for freedom and West Germans’ solidarity with them.”

Chancellor Angela Merkel, who grew up in the East, will join the tribute to the victims on Bernauer Strasse, a street cut in two by the Wall, the scene of agonized families brutally divided and daring escapes.

Freya Klier, a 77-year-old former East German dissident, will recount her experiences in the Stalinist state, which built the Wall to stop an exodus of its citizens to the West.

The anniversary will also see the inauguration of a new section of a memorial on Bernauer Strasse, where there is an original section of the Wall, a museum and photographs of Easterners shot trying to escape.

The new exhibition illustrates the impact of the city’s division on people in the East as well as the West.

At midday, Berlin was to observe a minute of silence in memory of the victims, with buses and trains scheduled to stop as part of the tribute.

On the morning of August 13, 1961, East Berliners woke to find soldiers had blocked off the streets, cut off rail links and begun building a wall of barbed wire and cemented paving stones which over the years, in Berlin, grew in height and complexity over 155 kilometres (96 miles).

At least 136 would-be refugees are known to have died at the Wall. Historians suggest that the overall figure of those killed while fleeing from all of East Germany stands at between 600 and 700 although victims’ groups say the number is higher still.

Germans note that the division still lingers between the poorer east and the more prosperous west.

“Most east Germans don’t know which world they belong to. They don’t see themselves as full members of a unified Germany.”