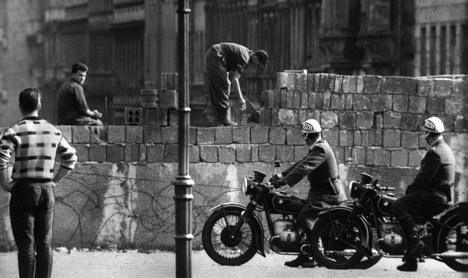 It was still dark when Russell Swenson was ordered to get his gun on the morning of August 13, 1961. The then 20-year-old was bussed to Berlin’s Potsdamer Platz with other American soldiers, unsure what would happen next.

The empty heart of the city, destroyed in the war, was hectic that morning. Police and soldiers from communist East Berlin kept civilians at bay while construction workers calmly built the foundation of what would become the notorious Cold War barrier. In the pre-dawn darkness, helicopters hovered overhead, illuminated by spotlights on the ground.

As the US soldiers at first kept their distance, Soviet troops were nowhere to be seen.

“We just sat there and watched as the sun came up and as these masons started just putting the (concrete blocks) on the street and putting some mortar and putting another block on top,” Swenson told The Local.

From May 1960 to May 1962, Swenson, now 70, lived at Andrews Barracks in Lichterfelde and worked at the Teufelsberg listening station. An intercept operator of non-Morse communications in the 280th United States Army Security Agency (ASA), he monitored teletype and voice communications coming out of East Germany.

Although the actual construction of the Berlin Wall came as a surprise, the amount of people fleeing East Germany increased dramatically during the summer of 1961, said Swenson, who spent April through June 1961 at Marienfelde refugee camp.

“Leading up to the Wall, it was immense. There were just floods of people coming over,” Swenson said. “I get a kick when people talk about the Wall and they just don’t understand why it went up. It went up to stop people from going across.”

The day before the Wall was built, military and police communications spiked, Swenson recalled from conversations with the on-shift intelligence officers.

“Not too many people realized that at midnight that night, the 13th, the East Germans were closing these little entrances around the whole city of Berlin,” Swenson said.

The East Germans’ next step – laying bricks across the streets – was first real indication of what they were doing, he said.

For Swenson and the rest of the men at his barracks, the morning of August 13, started with what they thought was a routine alert, practices that generally lasted half an hour. However, when the soldiers got out to the field, they were ordered to put on their uniforms and pick up their weapons at the armoury.

“Now that was never ever done before. No one ever went and got a gun,” he said.

They arrived to the mass confusion at Potsdamer Platz at “probably four, four-thirty in the morning,” Swenson said. German civilians were held back hundreds of metres from the Wall by the US Army and the West Berlin police.

At one point, Swenson went up to the masons with a small group of soldiers, including some linguists, about six inches away from the skinny grey cinder block line, to ask the East German police what they were doing. Those speaking German tried to engage the guards in some sort of conversation. Nobody answered.

According to Swenson, the initial Wall seemed ludicrous: “It was like a symbolic wall. I mean, you could have kicked it over. It was six inches wide and a foot high at the time.

“The bad thing was that when the sun came up, there was a tremendous amount of military equipment on the other side of where we were – much, much more in evidence than what the American army could do,” he said. “We were pretty small.”

As the morning continued, the parties on the western side remained passive onlookers, while the East German masons continued to lay the cinder blocks, reaching a height of about five feet before stopping. Lines of green Russian tanks were parked behind the new barrier, ominously reinforcing the nascent Iron Curtain.

“It was fairly formidable. None of us were too excited about being there at the moment,” Swenson said.

Around 9 or 10 am, the soldiers were bussed back to the barracks.

The Wall was such a surprise that there was little else the US forces stationed in Berlin could do, Swenson said. “Nobody expected it; that’s why there was no plan to do anything about it,” he said.

The mostly symbolic barrier stayed in place for a few days before East Germans started putting up a more fortified barrier.

“At first the Wall didn’t stop anything because I don‘t think people thought it was going to last,” Swenson said.

As East Germany spent the coming months and years fortifying the construction – knocking down buildings, erecting watch towers, widening the death strip – West Berliners, perhaps hardened by their experiences during the failed Soviet blockade of the city in 1948-49, went about their lives.

Swenson, too, went back to his Army routine, taking advantage of his free days to ride a twin-cylinder BMW motorcycle he bought from another American soldier returning to the States.

Using German learned in his military language classes, he talked to tradesmen at the motorcycle shops, later hanging out at beer gardens and exploring the small bars around the city.

“That was the best time ever. We were treated like kings,” he said.

He said most of the younger Germans he met avoided political conversations, but older West Berliners were “feverishly opposed to what was happening with the Wall.”

“I don’t think people thought it was going to last very long, certainly not 30 years,” said Swenson, who hopes to visit Berlin again later this year. “I can’t believe it’s been fifty years this week, feels like fifty minutes.”