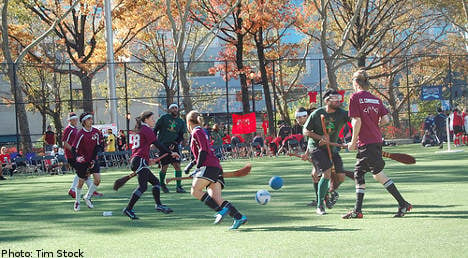 Are you a Chaser, Beater, Keeper or Seeker? If you recognize these positions and the sport they entail, you’re in the right place. And not to worry, flying skills are not required.

Athletes from across the nation are busy fine tuning their skills before descending on the Stockholm suburb of Huddinge from August 12th-14th to dodge Quaffles and Bludgers and catch the all-elusive Snitch in a series of games brought to life from the pages of British author J.K. Rowling’s celebrated Harry Potter books.

Students Miran Fisli, 20, Erik Fahlén, 21, and Li Hjalmarsson, 22, are proud to have called themselves Harry Potter fans for at least 10 years, and this passion was what influenced them to arrange this year’s Swedish Quidditch Cup when last year’s organizers failed to do so.

“We started out talking with different municipalities around Stockholm to see if anyone was interested in helping us, until we got a good response (from Visättra Sportcenter in Huddinge). The people there have been really helpful and almost as enthusiastic as us at times about this unique sports arrangement!” Erik tells The Local.

This year’s tournament will feature one Danish team among a total of seven, and any number of spectators from the wizarding world.

Erik explains that the competition is a relatively new object of fascination in Sweden, being held only once before in 2010.

“Last year it was not quite as serious, as we were not at a real sports centre, but simply at a public lawn,” he clarifies.

The Swedes are late to the fantasy banquet however, as American students have been charmed by the sport since 2005, starting at Middlebury College in Vermont.

The lure of their enchanting real-life adaption has escalated to give rise to the Quidditch World Cup, which celebrates its fifth anniversary this November. Definitely not at a public lawn, 100 teams will this year bring their brooms to Randall’s Island in New York City.

As any sport with such dedicated participation deserves, Quidditch has its own executive leadership – the International Quidditch Association (IQA), a self-described “magical non-profit dedicated to inspiring young people to lead physically active and socially engaged lives.”

The IQA is the body which decides the rules by which Swedish players base their game play on, though there is one major difference: those legendary wooden tools between your legs – Swedes prefer to leave them in the cleaning cupboard.

“We think it looks silly! We have been playing Quidditch since before we were aware of its existence in the US, and we never used brooms. It’s probably easier to get hurt with the brooms, so we choose not to use them,” Erik laughs.

Though all of this is somehow beginning to sound legitimate, how does one actually play a magical game without magic? The absence of magic in our world (or so us “Muggles” have been led to believe) has forced Quidditch enthusiasts to make do with real-life equivalents.

Among the candidates for the most curious of these adaptations must be the role of a yellow-clad person, with a tennis ball-containing sock hanging out of his or her shorts, in place of the series’ winged golden ball known as “The Snitch”.

Similarly instead of being knocked out during a game, which can be called a regular occurrence in true Harry Potter matches, players in the Swedish National Cup are subject to the “knock-out effect,” where if having been hit by a Bludger (a soft ball instead of a large iron one) they must high-five a team member on the bench to continue.

The tournament is set to close with a “Wizard Rock” concert on August 13th and an accompanying EP release featuring original Quidditch-themed songs, one of which is in English this year, with all proceeds go to charity.

Spellbound? The tournament is free to attend and Wizard Rock tickets are only 30 kronor ($5), so it won’t cost you much to witness the weird and wonderful that characterizes this one of a kind sport.