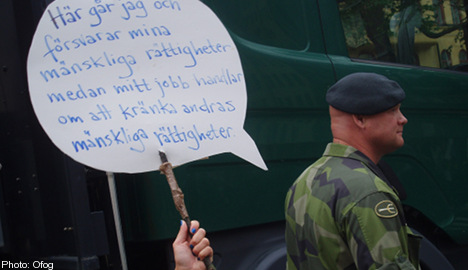 “We didn’t get very far before a group of girls turned up behind us holding up placards shaped like speech bubbles with various statements written on them. There wasn’t much we could do. It was very awkward,” said Micael “Totte” Ekdahl, chairperson for the Swedish Armed Forces’ LGBT association Hof (Homo-, Bi-, och transpersoner i försvaret) to The Local.

Some of the members of the association are reported to have sought legal advice and are considering whether to press charges.

The activists were part of an organisation called Ofog (literally translated as mischief). According to their website, Ofog is “an antimilitaristic network working with non-violent direct action against the arms trade, NATO, military exercises and other parts of militarism in Sweden and abroad”.

The organisation had earlier staged a “die in” in front of Hof’s stand in the Pride Park in central Stockholm.

“About 15 activists keeled over and played dead. We left them alone. After about half an hour they gave up and got up again,” said Ekdahl.

However, it was the placards and the activists’ presence around them in the parade that made the soldiers uneasy.

Messages such as “My job kills”, “I am just as good at killing people as a straight soldier” and “Here I am defending my own human rights while my job is about violating others’ ” were written on the placards that the activists held up behind the soldiers’ backs.

The activists took photos and the images were later posted on their website.

“It was very awkward because they wound their way in between us, and for me, who was guarding the truck’s wheel it was especially unpleasant as I was also worried about safety issues,” Ekdahl said.

On their website Ofog say that they were protesting against the armed forces’ presence in the Pride Parade as war and conflict add to the suffering of LGBT people and other minorities.

“Despite the fact that militarism builds on patriarchal macho-structures and violence that strikes against people both in Sweden and abroad, the army was allowed to join the parade,” the website says.

The aim of the action was to show what the militaristic reality really is and make visible what the armed forces really do, according to the website.

But according to Ekdahl it is the way that the activists went about it that has offended many of the participating soldiers.

“They wanted to strike out against the armed forces, but instead they targeted those within the army that really do fight for human rights. It seems a bit like an own goal,” he said.

He is disappointed that Pride security didn’t remove the activists, as they did other members of the public who ventured too close.

“I don’t think they were prepared for a situation like this. Pride should have moved them outside of the barriers. If they wanted to walk there that would have been fine. It was the closeness that made it a personal attack,” said Ekdahl.

Pride officials were notified of the situation on Sunday evening.

“The Pride parade is an open demonstration for human rights, it is a question of freedom of speech. I am sad to hear that some have used this freedom to target others. I have contacted Hof and expressed that I regret that some have been offended,” said Pär Wiktorsson, chairperson for the organisation of Stockholm pride to daily Svenska Dagbladet.