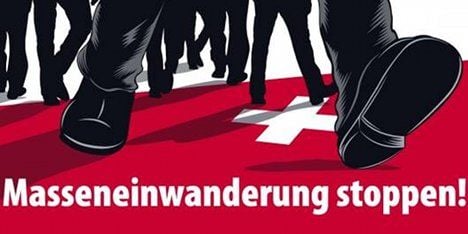 The “Masseneinwanderung stoppen“ initiative, calling for members of the public to sign a petition supporting a halt to mass immigration, was launched by the party just before Swiss National Day on August 1st.

Petition flyers were posted in letterboxes and posters showing black feet marching on the red and white Swiss flag are prominently displayed in railway stations with the slogan: “Stop mass immigration“ (Masseneinwanderung stoppen).

The collection of signatures in support of the campaign has begun, with an 18-month deadline to collect 100,000 names needed to spark a nationwide referendum on the issue.

The main reason for the supposed loss of control over immigration, according to the SVP flyer, is the “uncontrolled influx from the EU, our open borders and displaced asylum seekers.“

“With the popular initative against mass immigration, we can again decide who comes into our country. That is also beneficial to business,” it states on the flyer.

National Council member Peter Spuhler told SonntagsBlick he won’t sign the petition and called on others to follow suit. Alex Kuprecht, a member of the upper house of parliament fears the move would lead to the termination of the bilateral treaty with the EU. Spuhler said leaving the Schengen open-border area would be “a catastrophe”.

The Schengen treaty came into effect in Switzerland in 2008 putting an end to automatic passport control for people travelling between Switzerland and other member states.

Instead of the current freedom of movement laws, the SVP is calling for the reinstatement of quotas and restrictions for foreigners, giving Swiss people priority on the job market.

According to the SVP, the consequences of uncontrolled migration are: overfilled streets and trains, exploding rents and land prices, salaries under pressure, missuse of asylum and an increase in foreign criminality.

TRAVEL
What do Switzerland’s foreigners miss most during the pandemic? 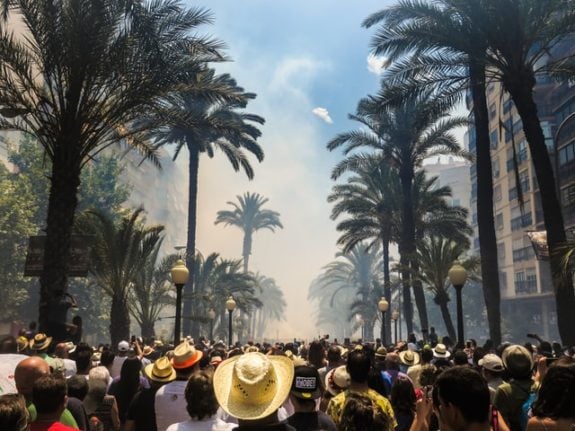 Spain has its highest number of foreigners on record

As of December 31st, 2020, 5,8 million foreigners resided in Spain, according to the Ministry of Inclusion’s Statistics of Foreigners Residing in Spain in 2020 report.

That’s 137,120 more than in 2019 – the highest number in Spain’s history – and despite the difficulties the pandemic and travel restrictions on mobility have had.

However, 2020’s figures do represent the lowest year-on-year increase since 2016.

Spain’s accumulated growth of foreign resident population in the last ten years is 19 percent, 16 percent in the last five, so most of the influx of foreigners has taken place in recent years.

Italians are falling increasingly in love with Spain

61 percent of the 5.8 million foreign residents living in Spain are from the EU/EEA.

Romanians make up over one million of them but Spain’s Italian population grew by 5.6 percent in 2020, consolidating itself as the second biggest EU population group in Spain with 350,981 residents.

Italians are choosing to move to Spain due to the comparatively lower cost of living and their love of Spanish lifestyle among several other reasons, with one 2018 article in El Confidencial quoting an Italian resident saying that Spain was “the epicentre of a Mediterranean utopia”.

The number of Britons who became residents in Spain went up by 6 percent last year, with 381,448 registered by December 31st 2020, the end of the transition period.

This means UK nationals continue to be the third biggest foreign resident population group in Spain after Romanians and Moroccans.

In 2019, there were 359,471 Britons with Spanish residency, which would mean 21,977 UK nationals obtained a green residency document or a new TIE card last year (now only the biometric TIE card is issued).

These are the latest figures from Spain’s Ministry of Inclusion which were last verified at the very end of the year, whereas according to the 2020 stats by Spain’s National Statistics Institute (INE) the total of UK nationals last year was 262,885, without specifying if this takes into account the full twelve months.

There’s also the fact that INE uses primarily local census information from the town halls (padrón address registrations, birth, deaths etc) rather than migration documents which could account for the stark difference.

BREXIT: How many Brits have left Spain and how many are staying? Most of Spain’s foreigners are in four regions

Out of these, seven provinces are particularly popular with extranjeros (Madrid, Barcelona, ​​Alicante, Malaga, Valencia, the Balearic Islands and Murcia), which account for 57 percent of the total and all have more than 225,000 foreign residents.

However, if the percentage of foreigners out of the total provincial population is analysed, Almería, the Balearic Islands, Lleida, Girona and Alicante are the provincias with the highest proportion of foreigners among their inhabitants. Valencia needs its foreigners for its population not to decline

In December 2020, the Mediterranean region had 773,010 foreign residents out of its total population of roughly 5 million.

As the Valencian Community’s vegetative growth (the difference between births and deaths) in 2020 showed a decrease of 6,815 –  largely due to Covid-19 –  but the positive migration balance ensured the region didn’t lose population.

The same has happened in other regions of Spain such as Castilla-La Mancha and Galicia where depopulation has been a problem for decades, as young people head off to big cities such as Madrid and Barcelona for career prospects, causing in the process an ageing of the population.

Venezuelans appear to have arrived en masse in 2020

The number of Venezuelan nationals who obtained residency in Spain shot up by 53 percent in 2020, far ahead of the 6 percent rise in resident Britons and 5.6 percent increase in Italians who’ve made Spain their home.

They now number 152,017 according to Spain’s Ministry of Inclusion, many of whom have arrived in the last few years fleeing the economic and political divides as well as the massive scarcities their home country is struggling through currently.

But there’s an explanation for the spike in new residents in a year governed by travel restrictions: in February 2019 Spain authorised temporary residency for this non-EU group for humanitarian reasons, which accounts for the sharp increase.

The exodus of Venezuelans to Spain mimics that of thousands of Spaniards to Venezuela over the first half of the 20th century, who left impoverished regions such as the Canary Islands and Galicia to find a better life in the then blossoming Latin American country.