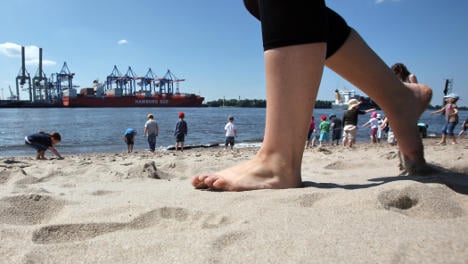 Imagine you’re lounging in a deck chair, seeking reprieve from a relentless sun beneath a striped umbrella, toes in the sand and a fruity cocktail in hand, maybe something out of a coconut. Jack Johnson croons from the bar speakers, offering anthems for a lazy beach day.

Fellow sun worshipers sprawled out on a terraced bank resemble spectators at a sporting event where they survey the entire beach as well as the no fewer than 20 nautical cranes, the Blohm + Voss dry dock and a massive cargo ship that is being ferried into port after a journey all the way from Hong Kong.

Cargo ships? Toto, we’re not in the Caribbean anymore. No, we’re at Strand Pauli on the shores of the Elbe River overlooking Hamburg’s industrial port.

Hamburg may not be the typical first choice of those in search of sea and sand, but it’s city beach clubs have charmed locals and visitors alike who claim they offer a quick vacation without leaving town.

According to Claudia Hauswedell-Glaser, proprietor of Strand Pauli, the trend sprung out of the uncharacteristically hot summer of 2003 when Hamburg felt more like St. Tropez temperature-wise. A few entrepreneurial party planners imported sand from the North Sea island of Sylt to create improvised “beaches.” They were so popular that several new clubs opened their umbrellas the following year.

City beaches are not unique to Hamburg, of course. Paris has imported sand to the banks of the Seine, London set up deck chairs on the Thames and Romans can sip cocktails while looking out over the Taber.

But rather than over looking the Notre Dame Cathedral or Big Ben, Hamburgers admire cargo ships. An eyesore to some, Hamburgers are extremely proud of their gritty port, a symbol of the hanseatic city’s history in trade and maritime transport.

Dry docks and cranes provide the backdrop for Strand Pauli, a local favourite, where patrons stick their toes in the sand and sink into the orange and brown bucket beach chairs or lay back on day beds under straw thatched umbrellas. A waiter clad in a St. Pauli t-shirt and cargo cut-offs brings a bucket of iced Astra beers to a group of young adults while their children are fully engrossed in the sand castle currently under construction.

“At Strand Pauli, everyone is welcome,” Hauswedell-Glaser says. “Young and old.”

And a quick look around confirms the mixed crowd does indeed feel at home here. “No one looks out of place at Strand Pauli – the old, the young, families with kids, holidaymakers or business-lunchers – it’s all status quo for Pauli,” says regular guest Anja, who is lounging with girlfriends.

If Jack Johnson’s surfer soundtrack sets the tone at Strand Pauli, then the DJ spinning lounge music defines the vibe at neighbouring Hamburg City Beach Club (HCBC) and Hamburg del Mar. Situated atop a parking deck next door to the old Elbe tunnel at Landungsbrucken, these clubs attract a cool clientele clad in skinny jeans, flowery sundresses and Ray Bans. Waiters deliver Flammkuchen and beach burgers to patrons who have staked out a spot on one of the slick white daybeds. Afternoons easily become evenings and DJs and disco balls transform the clubs from beaches into proper lounges.

But long before these locations emerged in recent years, there was the Strand Perle. Open since the mid-1970s, the Strand Perle is Hamburg’s original beach club. Today, it’s proud to continue what they call their “rustic” style as evidenced by what’s on offer at the bar: traditional sausage and fish roll with potato salad.

Sticking with classics is the rule of thumb here where the owners have shunned loungy day beds in favour of typical deck chairs and open spaces where patrons can throw out picnic blankets and sprawl out in the sand. Dogs, children and the occasional intrepid swimmer venture into the water as tug boats guide ships stacked several stories high with containers just a few meters away. For those who want to jump in rather than just admire from afar, Strand Perle is the way to go.

But you don’t necessarily need water to spend a day at the beach. At Central Park, a landlocked beach club in the Schanzenviertel district, patrons forego sea views for the S-Bahn train that chortles by overhead as they stick their toes in the sand at this former parking-lot-turned-sandbox. The bar is an unexpected oasis in the middle of the city that offers beach vibes and mojitos off the water.

Of course, the weather plays an instrumental role in how difficult it will be to find a free lounge chair at any of these beaches. “When the weather is good, so is business,” says Hauswedell-Glaser. One could characterize beach bar customers as fair-weather friends, making proprietors hope that the summer will be less damp for the rest of August than it has been so far.