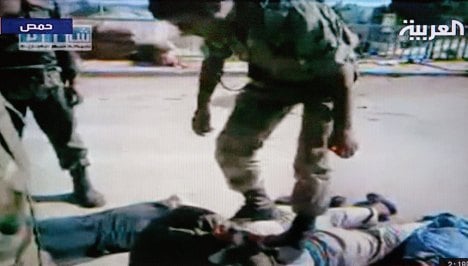 “If President Assad maintains his refusal to engage in dialogue with the Syrian people and continues to resort to violence, the German government will consider he has forfeited his legitimacy in further overseeing the fate of his country,” deputy government spokesman Christoph Steegmans told a regular press conference.

German Chancellor Angela Merkel also regretted that Assad had failed to take to heart appeals by the UN security council to renounce violence and welcomed the recent strengthening by the European Union of financial and diplomatic sanctions against leading members of the regime, Steegmans added.

“Their further widening to include economic matters is currently being thoroughly examined,” he added.

Earlier in the day, a senior member of Merkel’s party, Ruprecht Polenz, had called for a global boycott of Syrian oil and gas exports in the wake of the latest Syrian military clampdown on civilian demonstrators.

“We only have economic sanctions left as a means to convince Assad that he must stop the violence and resign,” the chairman of the parliamentary committee on foreign relations told public broadcaster Deutschlandradio.

Human rights organisations say the regime has killed more than 1,600 civilians and arrested 12,000 people since anti-government protests broke out in March.

Speaking of a possible boycott of Syrian oil and gas exports, Polenz warned that such a measure should be agreed by the international community as a whole if it were to work.

“Before one takes such a step one must be pretty sure that such relatively rare resources do not find buyers elsewhere, energy-hungry China being one such potential candidate,” he said.

Syria produces some 380,000 barrels of oil a day, much of which is exported to Europe, including Germany.

On Friday, US President Barack Obama, French President Nicolas Sarkozy and Merkel pledged “additional measures” against the Syrian regime in addition to sanctions already agreed by the European Union on freezing assets and denying visas to leading regime members.

Polenz also suggested that EU members join Italy in recalling their ambassadors from Syria “as a political signal that we cannot continue to communicate with Assad and his regime at the ambassador level.”

But a German foreign ministry spokesman, Dirk Augustin, later told a news conference that most EU countries still considered it useful to retain their envoys in Damascus.

“We consider it important that our ambassador remains” so as to maintain channels of information open and contacts with the opposition, he said.

Saudi Arabia this weekend was the latest country to recall its ambassador from Damascus for consultations.