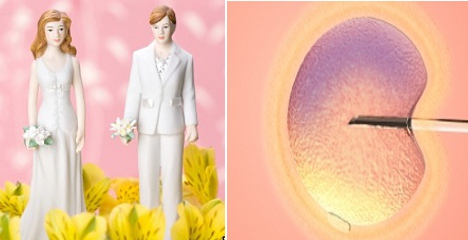 “We think that it is discriminatory that there are different prices for insemination,” Ulrika Westerlund of the Swedish Federation for Lesbian, Gay, Bisexual and Transgender Rights (Riksförbundet för homosexuellas, bisexuellas och transpersoners rättigheter – RFSL) said to the Aftonbladet daily.

In some counties the couples however have to pay for the procedure themselves. In Västmanland, for example, couples are obliged to fork up 12,000 kronor ($1,850). The going rate for the same procedure for a heterosexual couple is meanwhile a more modest 300 kronor.

Karin Lundström, the Västmanland county health care official, said to news agency TT that the reason behind the price span is the cost of procuring donated sperm, rendering the procedure more expensive for lesbians.

“It costs 12,000 kronor for anyone using a donor. Of course, for lesbians there will always be a donor, but we are talking about actual costs. That’s why it costs more,” she told TT.

But Ulrika Westerlund argues that the treatment is the same regardless of the sperm’s origin and thus the cost should be the same. Furthermore, she points out, some counties elect not to make a distinction between those who bring their own sperm and those who obtain it from a donor.

RFSL would like to see a development of uniform regulations which apply across the country.

“But that would be complicated and would require the state to go in and regulate. However, we think that the rules should at least be the same within the county council; as many attempts and the same fees regardless of whether it is a same–sex or a heterosexual couple,” Westerlund said to the newspaper.

But according to the Swedish Association of Local Authorities and Regions (Sveriges Kommuner och Landsting – SKL) this is not a medical problem and therefore it is up to the individual counties to decide.