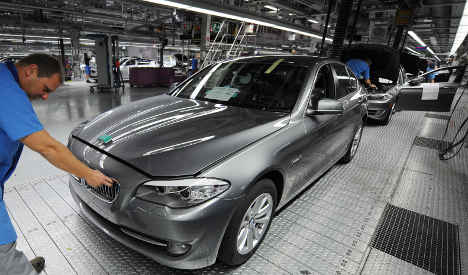 Presenting the firm’s half-year results on Tuesday, CEO Norbert Reithofer said production capacity had created a bottleneck, and was operating at 102 percent, according to Wednesday report by the Financial Times Deutschland business daily.

“We could have sold more cars,” he said, and announced that factories would be expanded and a new one built. The board will decided in autumn about whether to build an assembly facility in Brazil.

Overall, the BMW group – BMW, Mini and Rolls Royce – sold 833,366 cars in the first half of the year, nearly 20 percent more than the figure for the same period last year.

The last six months were the best in the company’s history in terms of sales, turnover and profit, BMW said, overtaking the healthy results recently posted by Daimler and Audi.

Yet the waiting times customers are currently having to swallow are not acceptable, said Reithofer. Particularly popular models such as the X3 are taking more than three months to reach their new owners.

“From our viewpoint, these delivery times are too long,” said Reithofer.

The fear is that although European customers may be willing to wait for their cars, those in the United States could decided for another manufacturer which can deliver immediately, the FTD said.

Only last year, BMW increased its production capacity in its American factory Spartanburg to reach 240,000, while this year production should reach 270,000. “The next step will take us towards 300,000,” said Reithofer.

Yet Reithofer said the company should not be complacent. “The global risks for a further boom are generally increasing rather than decreasing,” he said, suggesting factors such as the heavy debts of some states and political instability could be problematic.

BMW’s greatest increase in sales was recorded in Asia, where the first half of this year saw an increase of 47 percent over the same period last year. China accounted for nearly two thirds of these sales.

BMW lags behind Audi in this market though, the FTD said. A new BMW factory will start production next year in Tiexi, Shenyang Province, which will enable the group to produce a total of 300,000 units a year in China in the mid term.