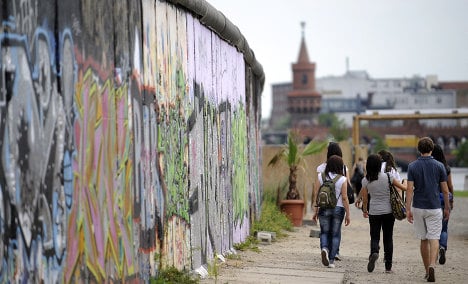 Seventy-two percent condemned the closing of the border to the West on August 13, 1961, which effectively made East Germans prisoners of their own country, in a survey for Super Illu magazine.

They concurred with the statement, when asked about the construction of the Berlin Wall: “I cannot understand it. The Wall brought endless suffering to the Germans. No state has the right to lock up its citizens.”

But a full 20 percent agreed with the statement: “I can understand it. The GDR had the right as a sovereign state to protect its borders,” referring to the German Democratic Republic, East Germany’s official name.

The communist authorities built the Berlin Wall to stop a mass exodus of citizens to the West.

But it called it an “Anti-Fascist Protection Wall” and claimed it was erected to guard against invasion from capitalist West Germany, which it considered the successor state to Nazi Germany.

Asked about lingering divisions between east and west Germans nearly 22 years after the Wall was torn down in a bloodless revolution, 83 percent said they thought there was still an “invisible wall” running through the country.

Only 15 percent said they thought the differences between those who had lived in the West and the East had been surmounted.

The poll was conducted among 1,017 east Germans between July 4 and 6 with a margin of error of 2.6 percent.

Eastern Germany still trails far behind the west in terms of economic prosperity, with a jobless rate which at 11 percent is nearly twice as high.

Many easterners condemn western “arrogance” during national reunification in 1990, as positive aspects of the communist state such as greater gender equality in the workplace and a better childcare network were lost.

Germany will mark the 50th anniversary next week with ceremonies in honour of the more than 600 people who are thought to have died trying to escape East Germany in the 28 years the Wall was standing.