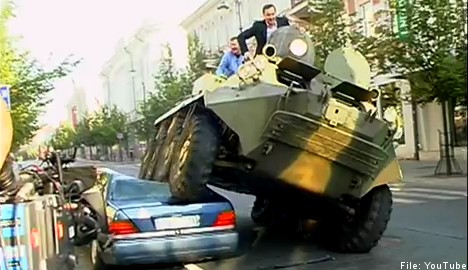 The film was recorded in connection with the popular Swedish TV show “99 things to do before you die” hosted by comic duo Erik and Mackan.

The episode features Mayor Arturas Zuokas, who has been described as a “militant cyclist”, riding in the tank together with Erik and Mackan towards a parked car.

The armoured vehicle is then driven over the car, crushing it in the process and drawing shock and consternation from its owner, who is a witness to the demise of vehicle from a nearby pavement.

“In my profession, you have to have a sense of humour,” Zuokas explained to the camera.

The mayor continued to explained that a “tank was the best option” to solve the problem of luxury car owners who he argues consider themselves above the law.

“That’s what happens when you park illegally,” Zuokas declared after the Mercedes car was demolished.

The owner of the vehicle is then told by the mayor that “next time park your car legally”, with the white-suited driver seemingly in sheepish agreement.

The film ends with the mayor sweeping away glass splinters from the road and cycling down the road on his bicycle.

The City of Vilnius official website currently features the film as a warning to all those tempted to take a chance and park their cars illegally.

The show is broadcast on Viasat owned TV6 and among the other antics deemed worthy of “doing before you die” have included featuring on a US chat show, getting close up and personal with great white sharks, and manning the controls of a helicopter.

The Local’s attempts to contact TV6 and the show’s production company OTW Media for a comment on Thursday were unsuccessful.