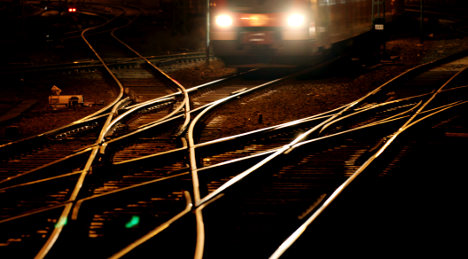 The legal hearing on the dispute was held in a court in Nuremberg on Tuesday, according to news magazine Der Spiegel.

The 52-year-old driver has ceded his complaint to his wife, who is appearing as the plaintiff, so the driver himself can appear as a witness.

The wife initially asked for €15,000 compensation. She says her husband has suffered nightmares, sleep disturbances and headaches since the incident. Additionally, he was unable to work for two weeks after the accident.

The dead man’s parents, who are not appearing in court, are still grieving, their lawyer Julian Rösch said.

“They can’t do anything about it. They have been affected and punished enough.”

The parents, Klaus and Martha S., believe their 20-year-old son Stefan, was the victim of an accident, rather than a suicide, when he was struck and killed by the train in January 2009.

Stefan was hit by the train at about 1 am near the Rehdorf train station just west of Nuremberg. The driver had no chance of stopping, as is usually the case in such incidents. According to investigation documents, the driver thought he had hit a wild boar and continued driving.

On his return along the same route, he checked the scene and this time thought he had hit a deer. Only on his third pass of the site of the incident did he realise he was looking at the body of a person. He alerted a colleague, who finally discovered Stefan’s body.

Since January 2011, the driver had come to terms with the incident and returned to a normal life, his wife’s lawyer Stephan Baumann said. But for two years he had suffered “the most serious problems” coping with everyday life. The image of the young man haunted him.

Judge Jana Lux said the damages amount was too high and suggested €3,000 to €5,000 was more fitting. The driver’s wife accordingly lowered it to €5,000 and the driver said he was amenable to that.

“I have no desire to go through the whole thing again,” he said.

Stefan’s parents now have two weeks to decide whether to accept the settlement or fight on. Their lawyer Rösch said that was still “a heap of money” to compensate two weeks off work.